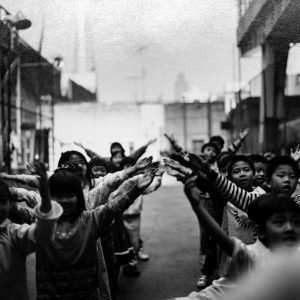 Photographing in Chinatown for me has meant a slow accumulation of pictures made in, around and of a location of historical and contemporary social separation, from the position of one separate within it. To convey this dialogue with separation, I am interested in the relays of meaning that can exist between social observations by turns empathic and reflective, proximate and distanced. My aim is not to capture or to visually possess Chinatown through these observations, but the oppositeto release Chinatown, as it were, into images of complex and not-fully-recovered social experience.

This project is a documentary response to San Francisco’s Chinatown, a complex neighborhood both segregated from and integrated into the city, both open and insulara place by turns announcing and sheltering the historical experience that gave rise to it. The neighborhood originated historically as a home and a resource for socially unassimilated Chinese in northern California. Born like the rest of San Francisco of immigration to California surrounding the Gold Rush, Chinatown grew up in the wake of nineteenth and twentieth century efforts to regulate ethnic interaction through fear, competition and racism. Characteristic of the Chinese experience in San Francisco during the latter decades of the nineteenth century was vehement anti-Chinese political invective, mob violence, lynching, legislated segregation for Chinese residents of the city in the area which is today Chinatown, and the detention of would-be immigrants on Angel Island during the long moratorium on Chinese immigration. For decades the neighborhood evinced forms of life that could survive the American experience, though in the white American imagination it emblematized something else: that which was oriental, taboo, foreign. By the middle of the twentieth century, the neighborhood had taken steps to capitalize on its grip over the imagination of outsiders. Physically manifest in the construction of Chinese-style architecture, particularly along the commercial corridor of Grant Avenue, the neighborhood assumed the identity of a self-commodified tourist destination, a place of tamed exoticismreplete with oriental gift shops, cheap curios, savory meals, and other forms of mediated cultural encounter. By mid-century, the internal social configuration of the neighborhood had also grown increasingly complex. With the repeal of the Chinese Exclusion Act, the social distortions of the earlier community easedspecifically, the large numbers of bachelor laborers, and the traumas of living with false identities (assumed to evade the exclusion provisions).

After 1947, with the lifting of the city covenant prohibiting persons of Chinese descent from owning property outside of Chinatown, many left the neighborhood. At the beginning of the twenty first century, Chinatown is a place that is international, multicultural and multilingual, a place where residents and visitors linger in conversation on corners, in shops and small markets, while shuffling tourists wield their maps and cameras. The neighborhood reflects better than any other location in the San Francisco Bay area the fathom of the Chinese American community’s prosperity and its poverty. It remains a cultural home for the middle and professional classes who have long since moved out, but who regularly visit for shopping, dining, participating in New Year festivities and other public events, and who retain their membership in temples and family organizations, and own and operate longstanding businesses, including workplaces relying on low-wage labor. The neighborhood remains the residence of many of the working poor of the Chinese community and other immigrant Asians, those who shop there not just on weekends but everyday, who eat their meals in the inexpensive restaurants, in the backrooms of businesses and in the sweatshops, who go to school there and spend afternoons in the squares and playgrounds. Still one of the most densely populated urban areas in the United States, the neighborhood continues to serve as a refuge and a resource for newly immigrated Chinese, the Chinese other of the white American imagination.

The historical issues central to this work in many ways pivot on the place of the photographer as social witness. This project attempts to retain the ethical motivation that animates the documentary tradition, namely authenticated social observation, but without relying on either the familiar position of the photographer as trusted insider, or as disinterested outsider. Instead, the project is made from the position of a self-conscious outsider, one who photographs not to overcome social barriers, but to communicate these barriers themselvesto photograph through and alongside and with them. Specifically, the project attempts to approach the experience of Asian immigrants by thinking visually, as it were, about social differenceways of rendering the experience of the immigrant so that it is neither exotic nor familiar, neither fully disclosed nor concealed.