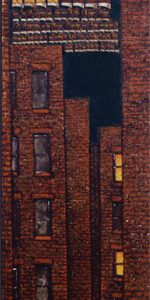 The Asian/Pacific/American Institute at New York University is proud to present the exhibition Art, Archives, and Activism: Martin Wong’s Downtown Crossings from March 6-December 18, 2009. From the mid ’80s through the early ’90s, artist Martin Wong and other downtown New York artists were affected by an intersection of major historic events spanning the AIDS epidemic, urban renewal and attacks on graffiti in the city, to Tiananmen Square abroad. The exhibition explores artists who crossed paths during this particular time, influencing and inspiring discussions, art works, and activism.

The exhibition winds a story through the voices of his closest friends and peers during Wong’s time in New York City from the early 1980s through the mid-1990s. As Wong would come to portray his friends, fellow artists such as Miguel (Mikey) Pinero, Sharp, Chris “Daze” Ellis, among others within his paintings, bringing them into a world of a Lower East Side re-imagined with the fantasies of escapism and romanticism of a barren land amid towering walls of crumbling brick where they dwelt, in this exhibition, the archival materials and lasting influences of Wong’s legacy and his friendships in turn shape a portrait of the artist-re-imagined and remembered.

The artist’s work shown in Art, Archives, and Activism range from the early ’80s through the ’90s and have been loaned from his estate at PPOW Gallery and the collections of his closest friends. Some photos, paintings and drawings have never been shown to the public before. Working with and drawing materials from the Fales Library and Special Collections at New York University along with personal collections, Art, Archives, and Activism presents a story of a time and the interconnectedness of the artists with the world around them through the artwork, letters, photographs, videos, postcards, posters, and flyers of participant artists. The exhibition traverses the artificial borders of these two decades, and instead is spread through the moment delineated by artists’ lives and the issues that engulfed them – their personal influences, artistic production and activism that were catalyzed from these connections and overlapping paths. The opening reception is also the reception and book celebration for the Asian American Art Symposium 2009 at NYU presented by A/P/A Institute and co-sponsored by The Noguchi Museum; The Japan Foundation, New York; The Asia Society; NYU Steinhardt School of Culture, Education, and Human Development; and Museum of Chinese in America.

For more information about the symposium is available here.