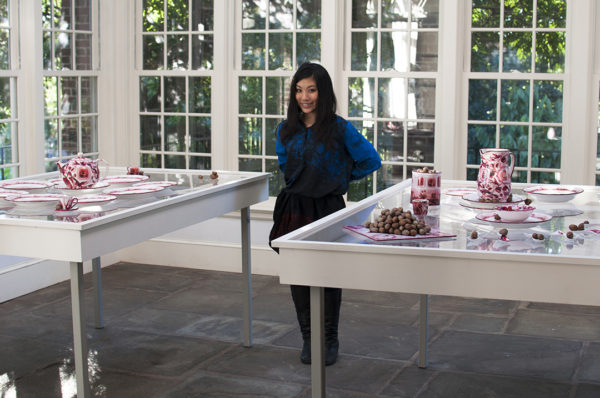 Beatrice Glow is an interdisciplinary artist whose work uncovers invisible, suppressed stories that lie in the geopolitical shadows of colonialism and migration. Her practice comprises of sculptural installations, trilingual publishing, participatory performances and lectures, and experiential technologies.

Glow is the recipient of the 2015 Van Lier Visual Art Fellowship at Wave Hill and was named a 2015 Joan Mitchell Foundation Emerging Artist Finalist. In 2014, she was awarded a Franklin Furnace Fund grant to create the Floating Library—a pop-up, mobile device-free public space aboard the historic Lilac Museum Steamship on the Hudson River. As a 2008-9 Fulbright Scholar, she traveled to Peru to pursue a research-creation project retracing “coolie” geographies.

Glow is a Hemispheric Institute of Performance and Politics’ Council Member, and previously was Artist-in-Residence at the LES Studio Program at Artists Alliance Inc. Her most recent activities include Aromérica Parfumeur, a solo exhibition at the Museo Nacional de Bellas Artes de Chile (2016); The Wayfinding Project at the A/P/A Institute at NYU (2016); Rhunhattan at Wave Hill (2015); and a lecture performance as part of Asia Contemporary Art Week’s Field Meeting Take 2 at the Venice Biennale (2015). She holds a BFA in Studio Art from NYU.

During 17th century Spice Wars, Dutch Nieuw Amsterdam was captured by the British and renamed “New York.” By 1667, the Dutch relinquished their claim to the colony in exchange for Rhun, the sole British colony in the Banda Islands of present-day Indonesia, thereby gaining monopoly of the lucrative nutmeg and mace trade. This pivotal moment came at a bloody cost for Indigenous peoples: the near complete decimation of the Bandanese and the Lenape people’s deepened dispossession of Mannahatta.

While in residence at the A/P/A Institute at NYU, I will research the social history of plants via spice routes and botanical expeditions to create a multiplatform project, Rhunhattan. I hope to expose the broken links of collective memory and the skewed politics of the archive that haunt the present like a repulsive perfume. I envision creating psychogeographic and immersive tech experiences, concocting the scents of colonial commerce, and reinterpreting chinoiserie to conjure the transhistoric weight of spice, color, and silk that have propelled forward countless caravans and ships in the birthing of imperial globalization.

This investment in the tale of two islands is rooted in my fascination with the relationship between Asia and the Americas, between diaspora and Indigeneity, and the oceanic circul

ations that connect islands to islands, continents to continents, and cultures to cultures. In the face of

global environmental degradation, inequality, and polarizing debates over political and cultural borders, it is key to recognize that all ethnospheres and biospheres are, like archipelagos, connected beneath the surface.

History, as consumed, too easily becomes a game of multiple choice with no apparent consequences except for who wins and who loses, and who scores higher on college entrance exams.

One of Beatrice Glow’s brilliant, creative obsessions is to bring “forgotten” things, places, and people together to feel some of the magnitude of past trade and land wars, and how such events continue to ramify. What did it mean for the Dutch to value the island of Rhun more than the backwater trading post of Nieuw Amsterdam? Her artistry is to bring back the wonder, juxtaposition, and scale.

Glow’s installations have us appreciate the “wayfinding” knowledges of Indigenous peoples and cultures. Through her collaborations with scholars and storytellers, we glimpse a foundational understanding of original peoples still actively making and creating during the centuries of colonial and cultural dispossession—what scholar philosopher Gerald Vizenor calls “survivance” renouncing “dominance, tragedy, and victimry.”