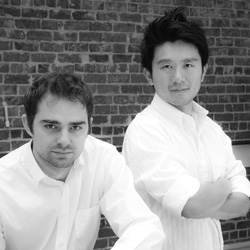 “Aaron and I started working in earnest on Stuck Elevator in 2007, when we had our first workshop presentation with one singer and one percussionist in Seattle…. This crucial residency provided access to resources such as interviews with immigration lawyers, Fujianese restaurant workers, and Asian American scholars. Through the A/P/A Institute, we were able to have readings at the Museum of Chinese in the Americas, Pearl Studios and Chen Dance Center. In 2010, we did 20-minute excerpts at On the Boards Northwest New Works Festival and Hand2Mouth’s Risk/Reward Festival. Since then, we’ve also had developmental workshops as part of the Yale Institute for Music Theatre, Sundance Theatre Lab at Banff, Sundance Theatre Lab at White Oak and American Conservatory Theatre.” —Byron Au Yong, A/P/A Artist-in-Residence 2009-10

Byron Au Yong composes songs of dislocation that combine voices with Asian, European, and handmade instruments. His cross-disciplinary, intercultural initiatives have been featured in festival, concert, and site-specific locations as diverse as the Hochschule für Musik und Theater Hamburg, Tokyo Art Museum, and Seattle Aquarium. Examples include Salt Lips Touching premiered outside a Confucian Temple at the Jeonju Sanjo Festival, Kidnapping Water: Bottled Operas performed in 64 waterways throughout the Pacific Northwest, and Forbidden Circles, presented at the Fukuoka Gendai Hogaku Festival and International House of Japan. Au Yong’s music is available on Periplum, New World Records, and other independent labels. He teaches at Cornish College of the Arts and serves on a Community Advisory Committee for the Wing Luke Asian Museum.

Aaron Jafferis has performed his hip hop poetry at Madison Square Garden, the Kennedy Center, and the National Poetry Slam Championships, where he was the 1997 Open Rap Slam champion. His hip hop musical Kingdom (music by Ian Williams) premiered at The Old Globe in 2009, won a 2008 Richard Rodgers Award from the American Academy of Arts & Letters, and the award for Most Promising New Musical at the 2006 New York Musical Theatre Festival. Described as “Raw…hard hitting…razor-edged…taps into pure blasts of emotion, like a needle dropped straight on the brain.” San Diego Union-Tribune. Other works include No Lie (Nuyorican Poets Café, H.E.R.E., Long Wharf Theatre, Passage Theatre, International Festival of Arts & Ideas) and Shakespeare: The Remix (TheatreWorks, St. Louis Black Rep, Capital Rep, Zachary Scott Theatre, Collective Consciousness).

Stuck Elevator is an operatic solo performance that finds an undocumented immigrant and a fortune cookie caught between fear and hope. It is prompted by the real-life experience of Ming Kuang Chen, the Chinese delivery man who was stuck in an elevator for three days. Seattle-based composer Byron Au Yong and New Haven-based hip hop playwright Aaron Jafferis began work on Stuck Elevator shortly after the incident happened in April 2005.

Suspended between the upward mobility of the American dream and the downward plunge into an empty abyss, Stuck Elevator explores the places between Refuge/Prison, Freedom/Safety, and Voice/Silence for a Chinese man in America. Trapped in the elevator, our character Kuang experiences a solitude and awakening that is super-heroic, stationary, and hidden.

In the middle of a recession, when the lives of undocumented immigrants are overshadowed by unemployment statistics, Stuck Elevator focuses on a heroism that happens day to day and dollar to dollar. The themes surrounding Kuang’s story propel the music: being stuck physically, emotionally, spiritually, financially, legally, and linguistically. His questions go from practical to existential, from “Where do I pee?” to “What is the meaning of life?” Kuang’s story reflects, and urges changes in, attitudes, services, and laws about immigration, China, indentured servitude, family obligation, money, hunger, love, and fortune cookies.

A/P/A Institute hosted the first New York City workshop performance of Stuck Elevator on Friday evening, September 18, 2009, at the new Museum of Chinese in America location designed by Maya Lin. After the standing room only performance, audience members had a chance to provide valuable feedback to the composer (Byron Au Yong) and lyricist (Aaron Jafferis). The following day, the creative team studio recorded “Stuck Elevator” thanks to the generosity of the Clive Davis Department at the NYU Tisch School of the Arts.

Here is a link to the recordings: hearbyron.bandcamp.com

Clicking on individual tracks reveals lyrics and info. We welcome your feedback on stuckelevator.wordpress.com

Stuck Elevator will premiere at the American Conservatory Theater in San Francisco from Thursday, April 4–Sunday, April 28, 2013. See how the project has developed since Byron and Aaron’s residency.