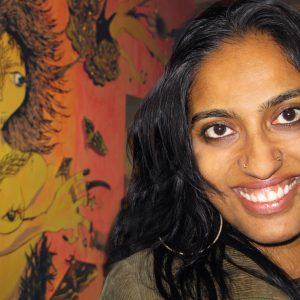 Chitra Ganesh was born and raised in Brooklyn, New York, where she currently lives and works. Her drawing, installation, text-based work, and collaborations seek to excavate and circulate buried narratives typically excluded from official canons of history, literature, and art.

Ganesh’s work has been exhibited widely at venues including the Brooklyn Museum, Queens Museum of Art, Asia Society, Bronx Museum of the Arts, Exit Art, White Columns, Momenta Art, and apexart in New York. International venues include the Gwangju Art Museum in South Korea, Fondazione Sandretto Re Rebaudengo in Italy, Museum of Contermporary Art Shanghai in China, Centro Cultural Montehermoso in Spain, and ZKM Center for Art and Media Karlsruhe in Germany.

Ganesh is a 2012 Guggenheim fellow, and her work has also been recognized with grants from the Astraea Lesbian Foundation for Justice (2004), New York Community Trust (2006), New York Foundation for the Arts (2005, 2009), Printed Matter (2009), Art Matters (2010), and Joan Mitchell Foundation (2010). Her work is represented in prominent international collections such as the Museum of Modern Art (New York), San Jose Museum of Art, Saatchi Gallery (London), and Devi Art Foundation (New Delhi), amongst others.

Mariam Ghani was born in New York and lives in Brooklyn. Her research-based practice spans video, installation, performance, photography, and text, and operates at the intersections between place, memory, history, language, loss, and reconstruction.

Ghani’s recent writing on spatial politics and poetics, networked archives, film and language has been featured in Triple Canopy, Creative Time Reports, Filmmaker, Mousse, Abitare, and the New York Review of Books blog. She has been awarded the New York Foundation for the Arts and Soros Fellowships, grants from the Graham Foundation for Advanced Studies in the Fine Arts, CEC ArtsLink, Mid Atlantic Arts Foundation, and Experimental Television Center, and residencies at the Lower Manhattan Cultural Council, Eyebeam Atelier, Smack Mellon, and Akademie Schloss Solitude.

Ghani holds a BA in Comparative Literature from NYU and an MFA from the School of Visual Arts. She has taught at Cooper Union, Parsons, NYU, Stevens, Otis, and Pratt. In addition to her work with Index of the Disappeared, she has collaborated with choreographer Erin Kelly since 2006, and with media archive collective pad.ma since 2012.

Chitra Ganesh and Mariam Ghani have collaborated since 2004 on the project Index of the Disappeared, which is both a physical archive of post-9/11 disappearances and a mobile platform for public dialogue. Index also stages visual and poetic interventions to circulate fragments of our archive in the wider world.

As an archive, Index of the Disappeared foregrounds the difficult histories of immigrant, ‘Other’, and dissenting communities in the United States since 9/11. Through official documents, secondary literature, images, and personal narratives, we trace the ways in which censorship and data blackouts are part of a discursive shift to secrecy. We track how this shift continues, for over a decade, to aggressively enact disappearances, deportations, renditions, and indefinite imprisonment on an unprecedented scale, now accompanied by unprecedented mechanisms of surveillance and drone warfare. Index builds up its collection by collaborating with those who actively take on political and legal challenges to the policies we track, and draws on radical archival, legal, and activist traditions to select, group, and arrange information.

As a platform, Index initiates discussions on ideas and issues related to the materials it archives, and draws upon materials in the archive to create site-specific installations and text-based works in a broad range of physical and virtual spaces. Index has been presented in galleries, museums, universities, community centers, libraries, conferences, publications, windows, the street, the web, and the mail. These visual, poetic, and public interventions are designed to confront audiences with the human costs of public policies, challenging them to re-consider the abstractions of political debate in specific, individual terms.

During Index of the Disappeared’s 2013-14 residency at A/P/A, the Index archive will be installed within and explore existing archives at NYU and be on view at the Gallery at the A/P/A Institute. Ganesh and Ghani will develop a series of posters and site-specific installations for NYU’s Kimmel Windows Gallery, based on new research into former black sites. Index will be collaborating with the Center for Constitutional Rights to organize an exhibition and publication of drawings and writing by Guantanamo detainee Djamel Ameziane. Finally, Ganesh and Ghani will convene both an NYU working group on archiving as a radical practice (in fall 2013) and a larger conference around the same topic (in spring 2014).

See a full list of previous Index of the Disappeared projects.

Index of the Disappeared: Secrets Told is a site-specific installation of images, sound, texts, and documents related to leak prosecutions, the surveillance state, and the persistence of the panopticon in the prison-industrial complex.

Index of the Disappeared: Watch This Space is a series of posters and installations created specifically for the NYU Kimmel Windows Gallery. The works on view reference techniques for both conducting and evading surveillance, and reflect the chilling effects of pervasive and invasive surveillance targeting communication systems and political speech. The exhibition’s title alludes to a strategy used by some librarians to circumvent gag orders imposed by National Security Letters, which demand access to patron records. These librarians have posted public signs that warn: “We have never been served an NSL; watch this space for the removal of this sign.”

Index of the Disappeared: Watch This Space will be on view in NYU’s Kimmel Windows Gallery from Tuesday, April 15-Monday, May 19, 2014. The windows are located on LaGuardia Place and West 3rd Street and are viewable from the street, 24/7. Opening talk and reception: Friday, April 19, 2014, 6:30-9PM.

Index of the Disappeared: Parasitic Archive installs a library-within-a-library version of the Index archive in the Richard Ettinghausen Library at the NYU Kevorkian Center, integrating literary and media resources culled from the library’s collection, with primary source documents from the Index’s collection, to tempo- rarily re-design the library environment.

Index of the Disappeared: Parasitic Archive will be on view at the Richard Ettinghausen Library, NYU Hagop Kevorkian Center for Near Eastern Studies (50 Washington Square South, entrance at 255 Sullivan Street) from April 7-May 12, 2014, Monday-Friday, 9AM-5PM except when occasional lectures take place. Please see neareaststudies.as.nyu.edu/page/events before planning your visit. Opening talk and reception: Friday, April 19, 2014, 6:30-9PM.

Rarely do we consider how being an American is linked with systems of identification and dis-identification. This is the brilliance of Index of the Disappeared. It makes evident and challenges the systemic and brutal othering of Arabs and Muslims in the name of American democracy.

Index is ingenious in its familiar, seemingly innocent everyday-ness. Anyone who works in an office or has attended college is comfortable with desks, shelves, files, and archives. Such placeless places define white-collar work, especially in the age of the much touted “clean,” information-driven economy. With corporate media’s “big data” and the recent leaks revealing government-corporate “spying,” we clearly need to better understand what’s going on.

The sustained, important individual and collaborative work of Chitra Ganesh and Mariam Ghani is an excellent place to begin. And we’re delighted to have them both as our 2013-14 Artists-in-Residence.

It’s been nearly ten years since Index was first installed as an interactive, dialogue-driven archive. Perhaps its novelty in the art world has worn off, but its power and significance for engaged citizens of the world has only grown. Indeed, with the perspective we now have on 9/11 and post-9/11, we can begin to consider some larger historical arcs.

As we sit in the space, interact with the files, and look up someone who has been disappeared, we begin to understand how this recent round of the detention, surveillance, and violation of Arab and Muslim bodies in the name of Homeland Security perpetuates an abstracted violation of and violence against those who could be friends, family, and neighbors. Surveillance and ID technologies, drone attacks today, the air war in Southeast Asia, and files, files, files are the guts of anti-Asian fear manifest and manipulated into Research and Development cash and infrastructure expansion.

This is where critical Arab, Muslim, South Asian, Asian American archival and historical studies are foundational to gaining a more objective US history. Anti-Asian fear has driven US trade, border, immigration, and citizenship policies from 1776 to today. Despite the historical and cultural differences between one group from the vastness of Asia and another, we are linked through the longstanding representation of the Asian Other as a perennial threat to the virtuous national body.

Perhaps analyst scholar Chandan Reddy is correct: violence is hardwired into this nation’s “peace”—“freedom with violence” defines our humanist/dehumanist domestic peace/foreign war policies. Americans need desperately to reckon with this larger, disappeared history of the United States of America. But can we?!