It is with great sadness that we mourn the passing of friend and legendary photographer Corky Lee (1947-2021). His passion for documenting the experiences of Asian America, and his commitment to building an invaluable visual record will ensure that these histories are not forgotten.—A/P/A Institute at NYU, January 2021 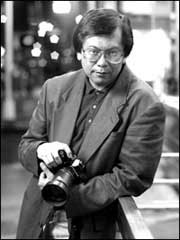 Corky Lee, a self-taught photographer, has been documenting the vibrant and fast-emerging Asian/Pacific/American community. Known as the “undisputed unofficial Asian American Photographer Laureate,” the ubiquitous Lee has covered the day to day lives of Asian/Pacific Americans as well as historical moments in American history.

For thirty years, Lee has used his camera to ensure that the faces of Asian/Pacific Americans and their experiences be included in American history. His mission has been to document the incredibly diverse Asian American communities ignored by mainstream media. In an interview in AsianWeek Corky commented: “I’d like to think that every time I take my camera out of my bag, it’s like drawing a sword to combat indifference, injustice and discrimination, trying to get rid of stereotypes.”

Lee was set on his photojournalistic course in junior high school by a famous photograph taken at Promontory Point, Utah, in 1869. The picture commemorated the completion of the transcontinental railroad and showed workers posing with two trains, one from the Central Pacific and one from the Union Pacific. But something was wrong with this picture. No Chinese workers. Since Lee first laid eyes on that photograph, he has devoted himself to making Asian/Pacific Americans visible.

At once intensely personal and socially conscious, Lee’s self-styled photojournalism crosses the divides of different Asian nationalities, and presents a rich picture of Asian/Pacific Americans adjusting and finding their place in the US. As a photojournalist imbued with an unyielding passion for community activism, Lee has challenged stereotypes by offering diverse images from the often invisible and excluded Asian/Pacific American communities.

His work, which has been described as “only a small attempt to rectify omissions in our history text books,” has appeared in Time magazine, The New York Times, The Village Voice, Associated Press, The Villager, and Downtown Express, as well as exhibitions throughout the United States, including Boston, San Francisco, Honolulu, and Denver. On college campuses, his photographs have been exhibited at Cornell, Columbia, Harvard, Princeton, and John Jay College of Criminal Justice in New York City. Corky contends that he owes much of his success to the Asian American press, notably A Magazine, Filipinas Magazine, and Koream Journal in addition to the following newspapers: AsianWeek, Asian New Yorker, NY Nichibei, Rafu Shimpo, International Examiner and Hawaii Herald.

Born and raised in Queens, New York, Lee is a second-generation Chinese American and the eldest child of a “paper son” laundryman and a seamstress. Lee is a graduate of Queens College and lives in Queens.