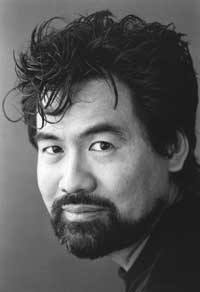 DAVID HENRY HWANG is a playwright, screenwriter, and librettist, best known as the author of M. BUTTERFLY, which ran for two years on Broadway and won the 1988 Tony, Drama Desk, John Gassner, and Outer Critics Circle Awards, as well as the 1991 L.A. Drama Critics Circle Award. The play also enjoyed a one-year run on London’s West End and has been produced in over three dozen countries to date. His most recent play, GOLDEN CHILD, premiered Off-Broadway at the Joseph Papp Public Theatre, received a 1997 OBIE Award for playwriting, and subsequently moved to Broadway, where it received 1998 Tony and Outer Critics Circle Nominations for Best Play. He is currently represented on Broadway as co-author of the book for Elton John and Tim Rice’s Aida, which received four 2000 Tony Awards. His new version of Rodgers & Hammerstein’s FLOWER DRUM SONG will premiere in Los Angeles in April 2001, and is slated to arrive on Broadway in October of that year. He is also working on a new play about Paul Gauguin.

David Henry Hwang has been awarded numerous grants, including fellowships from the Guggenheim and Rockefeller Foundations. In 1998, the nation’s oldest Asian American theatre company, East West Players, christened its new mainstage The David Henry Hwang Theatre. By appointment of President Clinton, he also serves on the President’s Committee on the Arts and the Humanities.