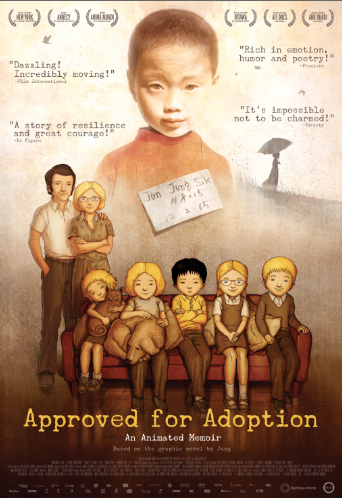 UPDATE: A/P/A subsidized tickets are no longer available, but you can still join us for the 7:15PM screening and panel discussion by purchasing tickets from the Angelika Film Center.

The Asian/Pacific/American Institute at NYU invites you to join us for the New York City premiere of Approved for Adoption. This remarkable animated documentary traces the upbringing of  filmmaker Jung Henin, one of over 200,000 Korean children adopted by American and European families since the end of the Korean War. Sepia-toned animated vignettes–some humorous and some poetic–track Jung from the day he first meets his new Belgian siblings, through elementary school, and into his teenage years, when his emerging sense of identity begins to create fissures at home and ignite the latent biases of his adoptive parents. The filmmaker tells his story using his own animation intercut with snippets of super-8 family footage and archival film. The result is an animated memoir like no other: clear-eyed and unflinching, humorous and wry, and above all, inspiring in the capacity of the human heart.

An interdisciplinary panel featuring Marissa Martin (Also Known As), Eleana Kim (University of Rochester), Sun Mee Chomet (How to be a Korean Woman), Jason Hoffman (Going Home), and April Dinwoodie (Adoption Institute), and moderated by Amanda Baden (The Handbook of Adoption: Implications for Researchers, Practitioners, and Families and Families with Children from China, NY Chapter) will follow the screening.