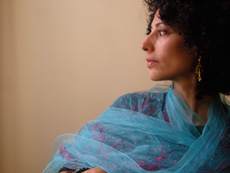 Join us as we welcome this year’s A/P/A Institute Artist-in-Residence, Suheir Hammad. Experience some of her past work and hear about what’s upcoming for 2010-2011. Check our website at apa.nyu.edu/ for program updates and more information about the Artist-In-Residence Welcome and Launch.

Free and open to the public. Please RSVP to A/P/A Institute by Wednesday, September 15th.

Suheir Hammad is a Palestinian American poet, author and political activist who was born on October 1973 in Amman, Jordan to Palestinian refugee parents and immigrated with her family to Brooklyn, New York City when she was five years old.

She is the author of breaking poems, recipient of a 2009 American Book Award, and the Arab American Book award for Poetry 2009. Her other books are ZaatarDiva, Born Palestinian, Born Black and Drops of This Story. Her work has been widely anthologized and her produced plays include “Blood Trinity” and “breaking letter(s),” as well as the libretto for the multimedia “Re-Orientalism.” An original writer and performer in the TONY award winning Russell Simmons Presents Def Poetry Jam on Broadway, Suheir appears in the 2008 Cannes Film Festival Official Selection, “Salt of This Sea.”

“During my residency, I’d like to continue studying the various myths and national histories surrounding the Queen of Sheba, and the temple of Jerusalem. Known by different names and claimed by opposing narratives, “the Queen” has influenced artists throughout the centuries, and has begun to appear within the body of my new work. A longer, sometimes more formal, poetic is emerging and I’m looking forward to the ride, which so far has introduced me to ideas and subjects too surprising and numerous to list.”