Co-presented with the Hagop Kevorkian Center for Near Eastern Studies

Featuring Faiza Patel (Co-Director of the Liberty & National Security Program, Brennan Center for Justice at NYU School of Law), Jack G. Shaheen (NYU Distinguished Visiting Scholar), Ramzi Kassem (CUNY School of Law), and Moustafa Bayoumi (Brooklyn College and author of How Does It Feel To Be a Problem?: Being Young and Arab in America). Moderated by Jack Tchen. 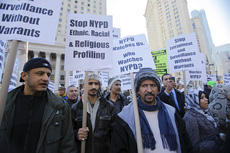 Inspired by the NYPD’s admission to have used the inflammatory film The Third Jihad in training its officers, this panel discussion will give the story behind this discovery and detail the legal work it took to bring the information to public light. Panelists will also critique the film (and other media that capitalize on problematic stereotypes) whilst reflecting on the decay of civil rights in America for Arabs, Muslims, and other groups.

The A is for Arab: Stereotypes in U.S. Popular Culture traveling exhibition (culled from the Jack G. Shaheen Archive) will be on display prior to and following the event.