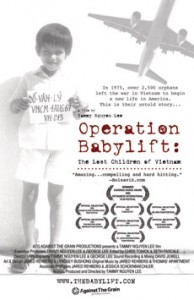 Operation Babylift: The Lost Children of Vietnam tells the significant yet untold story of the $2 million dollar U.S. initiative that airlifted over 2,500 Vietnamese orphans out of a war-torn country to protect them from the impending threat of the Communist regime. These adoptees grew up facing unique challenges in America, including prejudice overshadowed by a controversial war and cultural identity crisis. Featuring compelling and insightful interviews of the volunteers, parents, and organizations directly involved, the movie takes a contemporary look at Babylift and its relevance to international adoption today. A post-screening panel will discuss Operation Babylift as well as the issues faced by adoptees from Asia. www.thebabylift.com

Co-sponsored by Families with Children from China of Greater New York and Also Known As, Inc. Supported by NYU Center for Media, Culture and History/Center for Religion and Media.

Co-sponsored by: Families with Children from China of Greater New York and Also Known As, Inc.