This event is full and registration has closed. Walk-ins will be seated as capacity allows.

This year marks 40 years since the end of the Vietnam War, which claimed the lives of over four million Southeast Asians across Vietnam, Laos, and Cambodia, and created millions of refugees. What, in this moment of commemoration and reflection, are the lasting legacies of the Vietnam War / American War for Southeast Asian diasporic communities? (Re)Collecting the Vietnam War, a special issue of The Asian American Literary Review, asks artists, writers, and thinkers to contemplate this question.

Anida Yoeu Ali is an artist whose works span performance, installation, video, poetry, public encounters, and political agitation. She is a first generation Muslim Khmer woman born in Cambodia and raised in Chicago. After residing for over three decades outside of Cambodia, Ali returned to work in Phnom Penh as part of her 2011 US Fulbright Fellowship. Utilizing an interdisciplinary approach to artmaking, her installation and performance works investigate the artistic, spiritual and political collisions of a hybrid transnational identity. Her pioneering work with the critically acclaimed group “I Was Born With Two Tongues (1998-2003)” is archived with the Smithsonian Asian Pacific American Program. Her artistic work has been the recipient of grants from the Rockefeller Foundation, Ford Foundation, the National Endowment of the Arts, and the Illinois Arts Council, and she is the 2015 winner of the Sovereign Asian Art Prize for her work with The Buddhist Bug series. Anida earned her BFA from University of Illinois, Urbana-Champaign and an MFA from School of the Art Institute Chicago. She is a collaborative partner with Studio Revolt, a transnomadic independent artist run media lab currently working sans-studio.

Viet Thanh Nguyen is an associate professor of English and American Studies and Ethnicity at the University of Southern California, as well as a member of the steering committee for the Center for Transpacific Studies. He is the author of Race and Resistance: Literature and Politics in Asian America (Oxford University Press, 2002) and the novel The Sympathizer (Grove/Atlantic, 2015). His articles have appeared in numerous journals and books, including PMLA, American Literary History, Western American Literature, positions: east asia cultures critique, The New Centennial Review, Postmodern Culture, the Japanese Journal of American Studies, and Asian American Studies After Critical Mass. He has been a fellow of the American Council of Learned Societies (2011-2012), the Radcliffe Institute for Advanced Study at Harvard (2008-2009), and the Fine Arts Work Center (2004-2005). He has also received residencies, fellowships,  and grants from the Luce Foundation, the Mellon Foundation, the Asian Cultural Council, the James Irvine Foundation, the Huntington Library, the Djerassi Resident Artists Program, the Bread Loaf Writers’ Conference, Creative Capital and the Warhol Foundation.

Monique Truong, a novelist and essayist based in Brooklyn, is the author of Bitter in the Mouth (Random House, 2010) and The Book of Salt (Houghton Mifflin, 2003). Truong is also a co-editor of Watermark: An Anthology of Vietnamese American Poetry & Prose (Asian American Writers’ Workshop, 1998). Truong’s novels have received the Rosenthal Family Foundation Award from the American Academy of Arts and Letters, New York Public Library Young Lions Fiction Award, Bard Fiction Prize, Stonewall Book Award-Barbara Gittings Literature Award, PEN Oakland/Josephine Miles National Literary Award, Association for Asian American Studies Poetry/Prose Award, and Asian American Literary Award, among other honors. Truong was a PEN/Robert Bingham Fellow, Princeton University’s Hodder Fellow, Guggenheim Fellow, and Visiting Writer at the Helsinki Collegium for Advanced Studies. In 2015, she is a U.S.-Japan Creative Artists Fellow and the Kirk Writer-in-Residence at Agnes Scott College. In the Fall of 2016, Truong will be the Sidney Harman Writer-in-Residence at Baruch College. 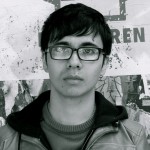 Ocean Vuong is the author of Night Sky with Exit Wounds (Copper Canyon Press, 2016). A 2014 Ruth Lilly fellow, he has received honors from Poets House, The Civitella Ranieri Foundation, The Elizabeth George Foundation, The Academy of American Poets, and a 2014 Pushcart Prize. His poems appear in the, Best New Poets 2014, Boston Review, Kenyon Review, The Nation, The New Republic, The New Yorker, Poetry, Tri-Quarterly, andAmerican Poetry Review, which awarded him the 2012 Stanley Kunitz Prize for Younger Poets. Born in Saigon, Vietnam, he lives in New York City.