Join the Asian/Pacific/American Institute at NYU for a screening of the powerful, critically-acclaimed documentary The Delano Manongs: Forgotten Heroes of the United Farm Workers. Using archival footage and interviews with the Manongs and their families, filmmaker Marissa Aroy carefully uncovers the history of Filipino farmworkers who spurred the 1965 Great Grape Strike and joined forces with Chicano workers to create the United Farmworkers Union.

Poet Joseph Legaspi opens the program with new works inspired by the stories of the Manongs (Ilocano term of respect for older men). After the screening, Aroy will be joined in conversation by Christine Bacareza Balance (University of California, Irvine) and, via Google Hangout, Dawn Bohulano Mabalon (Little Manila Is in the Heart: The Making of the Filipina/o American Community in Stockton, California).

Registration is closed by walk-in guests will be seated.

Marissa Aroy, director, of The Delano Manongs received an Emmy for the documentary Sikhs in America, which was shown on PBS. She produced and directed Little Manila: Filipinos in California’s Heartland also for PBS and produced Sounds of Hope for Frontline World. Aroy holds a bachelor’s degree in psychology from Boston College and a master’s degree in journalism from University of California, Berkeley.  She recently came back from Tacloban where she was filming the aftermath of Typhoon Haiyan in Tacloban, Philippines for the United Nations Children’s Fund (UNICEF).

Aroy was named one of the most influential Filipina women in the US in 2009 by the Filipina Womens Network. She and her filmmaking partner, Niall McKay, founded Media Factory, a media production company in 2004. 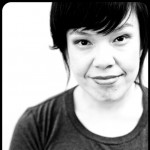 Joseph O. Legaspi is the

Dawn Bohulano Mabalon is Associate Professor of history at San Francisco State University. She received an MA in Asian American Studies from UCLA and a PhD in history from Stanford University. Her research focuses on Filipina/o American history, historic and cultural preservation, and the Filipina/o American foodways. She is co-founder of the Little Manila Foundation and serves as National Scholar on the Filipino American National Historical Society Board of Trustees. She is the author of Little Manila Is in the Heart: The Making of the Filipina/o American Community in Stockton, California (Duke University Press, 2013), which was awarded an honorable mention for the Frederick Jackson Turner Award (best first book) by the Organization of American Historians. Her essay “As American as Jackrabbit Adobo: Cooking, Eating and Becoming Filipina/o American Before World War II,” was published in Eating Asian America, ed. Robert Ku, Anita Mannur, and Martin Manalansan (NYU Press, 2013).