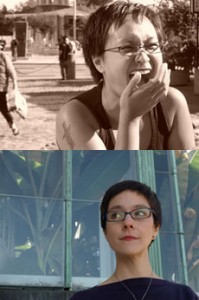 A conversation with Barbara Jane Reyes and Tamiko Beyer, moderated by Suheir Hammad. Reyes and Beyer will share original poetry, and enter a discussion worrying the dynamics of scholarship, canonization, research, and personal myth, as they engage with the poets’ blank page.

Tamiko Beyer is the author of bough breaks (Meritage Press, forthcoming). Her poems have appeared in Sonora Review, OCHO, Copper Nickel Review, and elsewhere. She is a Kundiman Asian American Poetry Fellow, a recipient of a grant from the Astraea Lesbian Writers Fund, and an Olin and Chancellor’s Fellow at Washington University in St. Louis where she is receiving her M.F.A. She is the poetry editor of Drunken Boat, and a founding member of Agent 409: a queer, multi-racial writing collective in New York City.

Barbara Jane Reyes is the author of Diwata (BOA Editions, Ltd., 2010). She was born in Manila, Philippines, and raised in the San Francisco Bay Area, and is the author of two previous collections of poetry, Gravities of Center(Arkipelago Books, 2003) and Poeta en San Francisco (Tinfish Press, 2005), which received the James Laughlin Award of the Academy of American Poets. She has taught Creative Writing at Mills College, and Philippine Studies at University of San Francisco. She lives with her husband, poet Oscar Bermeo, in Oakland.

Suheir Hammad is this year’s Artist-in-Residence at the A/P/A Institute at NYU. She is a Palestinian-American poet, author and political activist who was born in Amman, Jordan to Palestinian refugee parents and immigrated with her family to Brooklyn, New York City when she was five years old. She is the author of breaking poems, recipient of a 2009 American Book Award, and the Arab American Book award for Poetry 2009. Her other books are ZaatarDiva, Born Palestinian, Born Black and Drops of This Story. Her work has been widely anthologized and her produced plays include “Blood Trinity” and “breaking letter(s),” as well as the libretto for the multimedia “Re-Orientalism.” An original writer and performer in the TONY award winning Russell Simmons Presents Def Poetry Jam on Broadway, Suheir appears in the 2008 Cannes Film Festival Official Selection, “Salt of This Sea.”

Co-sponsored by: NYU Center for Multicultural Education and Programs