“I think of the bed as an extension of the earth,” says experimental documentary filmmaker Lynne Sachs. In this moving hybrid documentary/performance piece, the bed becomes stage as immigrant residents of a shift-bed apartment in the heart of Manhattan’s Chinatown are both performers and participants, storytellers and actors. Sharing their experiences as migrants and city dwellers, they reveal the intimacies and complexities of urban living.

RSVP by Monday, September 30 using the form below. 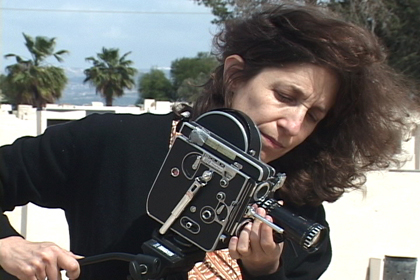 Lynne Sachs makes films, videos, installations, and web projects that explore the intricate relationship between personal observations and broader historical experiences by weaving together poetry, collage, painting, politics, and layered sound design. Since 1994, her five essay films have taken her to Vietnam, Bosnia, Israel and Germany—sites affected by international war—where she tries to work in the space between a community’s collective memory and her own subjective perceptions. Strongly committed to a dialogue between cinematic theory and practice, Lynne searches for a rigorous play between image and sound, pushing the visual and aural textures in her work with each and every new project. Supported by fellowships from the Rockefeller and Jerome Foundations and the New York State Council on the Arts, Lynne’s films have screened at the Museum of Modern Art, New York Film Festival, Sundance Film Festival, and in a five film survey at the Buenos Aires International Film Festival. Lynne teaches experimental film and video at NYU.

Yi Chun Cao was born in Nanjing, Jiangsu Province, China where he lived for forty-two years. He works full time as a building maintenance manager in Chinatown, but often performs in local dance productions. He felt it was a great pleasure to get everyone together, chat, and share stories while working on Your Day is My Night. He says these moments bring him warmth and happiness. During his leisure time, he likes to sing and dance with the performers in Chinatown’s neighborhood associations. Having lived in the US for so many years, he says he has finally become accustomed to life here.

Linda Y.H. Chan performs classical Chinese folk dance with the Lin Sing Manhattan Dance Group and the Yun Ji Dance Group. Committed to the health and well-being of her local community, she is a volunteer Tai Chi and Fan dance teacher in a variety of Chinatown parks and schools. Linda is head of volunteers at the Lin Sing Association in Chinatown.

Chung Qing Che was born in 1941 in Harbin in the northern part of China, close to the former USSR. His ancestors worked in a palace during the Ching Dynasty. Before he moved to the US, he was a medical professor in the Chinese university system. In 1996, he immigrated to the US where he could no longer practice medicine. During his early years in New York, he worked in a garment factory. Later, he began to use his medical knowledge more, as a massage therapist and in home care service while looking after seniors and the ill.

Ellen Ho was born in Guangdong, China but left for Hong Kong and Macao when she was twenty-three years old, later arriving in the US in the early 1960s at age twenty-seven. She raised her two sons in New York and lives here with the rest of her family. She no longer has any relatives in Guangdong. She worked as a seamstress most of her life and now is a grandmother. An active member of the Lin Sing Association, Ellen performs regularly in Chinese classical dance exhibitions throughout New York City. Her favorite moments during the production of Your Day is My Night included chatting with other performers and sharing their stories. Having been in New York for many years, she has gradually fallen in love with life in the US.

Yun Xiu Huang came to New York City from Fujian Province almost twenty years ago. Throughout his time in the US, he has worked as a professional singer and musician. His extraordinary voice has made him a renowned performer at weddings and banquets in the New York City Chinese community.

Sheut Hing Lee was born in Hong Kong and came to the US in the 1960s. She worked as a seamstress until her recent retirement. A member of the Lin Sing Association, Sheut Hing takes a great interest in her community’s cultural and social activities. She is also an eager participant in mahjong games with other seniors in her Chinatown neighborhood.

Karen Shimakawa is the Chair of Performance Studies at NYU Tisch School of the Arts and an adjunct instructor at the NYU School of Law. Her research focuses on critical race theory and Asian American performance.

Lesley (Yiping) Qin holds an MA in Cinema Studies from NYU. She currently works as the Program Associate at Asian CineVision (asiancinevision.org), the producers of the annual Asian American International Film Festival. She has also worked with MoMA Film Department, Tribeca Film Fesitval, and The Robert Flaherty International Documentary Seminar.