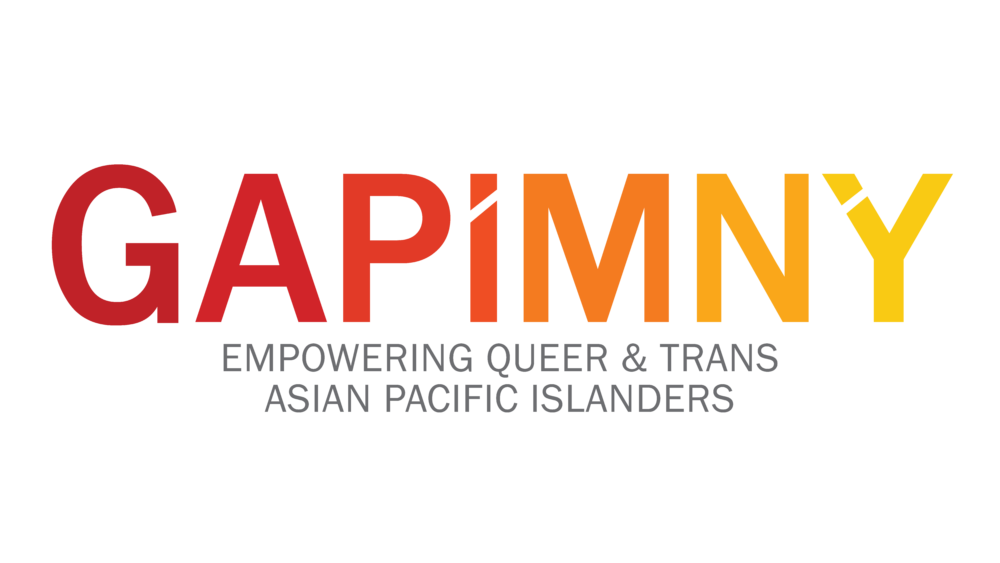 Founded in 1990, GAPIMNY (formerly known as Gay Asian Pacific Islander Men of New York) is an all-volunteer, membership-based community organization with the mission to empower queer and trans Asian Pacific Islanders to create positive change. It provides a range of political, social, educational, and cultural programming and works in coalition with other community organizations to educate and promote dialogue on issues of race, sexuality, gender, and health.

Throughout its history, GAPIMNY has actively engaged in LGBTQ and API rights advocacy and coalition-building. In 2004, when Details magazine published “Gay or Asian?”, a satirical feature stereotypically caricaturing LBGTQ and API people, GAPIMNY took early leadership of organized protests, demanding apology, retraction, and diverse and positive representations of LGBTQ APIs in Details, along with diversity training for the magazine’s staff. The organization argued that the article’s title, “Gay or Asian?” suggested that an individual could only be one or the other, but not both, perpetuating the invisibility of LGBTQ APIs. In addition to encouraging the thousands of letters, calls, and emails of protest sent to Details’s editorial office, the organization, along with Asian Media Watchdog, co-sponsored a noon-time protest outside the magazine’s New York editorial office at 7 West 34th Street on April 16, 2004.

In the past two decades GAPIMNY has worked to increase its outreach by partnering with a number of organizations, including the national Asian Pacific American Coalition for Equality and the National Gay & Lesbian Task Force Policy Institute, to raise awareness for LGBTQ civil rights issues and support civil rights legislation. In 2005, its fifteen-year anniversary, GAPIMNY sent a large contingent to the Creating Change Conference where hundreds of LGBTQ APIs came together to attempt the framing of a unified political, social, and cultural agenda. In 2011, GAPMINY made headlines by organizing protests against groups exporting “ex-gay” conversion therapy to Hong Kong, including “shower-ins” to discredit the pseudoscientific methods used by “ex-gay” groups. In 2012, GAPIMNY appeared at the National Queer Asian Pacific Islander Alliance (NQAPIA) National Conference in Washington, DC and participated in NQAPIA’s first annual Community Catalyst Awards in 2014.

GAPIMNY is led by an annually elected Steering Committee. The organization communicates its events and initiatives through its website and weekly email newsletter. GAPIMNY is currently led by two Co-Chairs, Binh Hoang and Ty Matsunaga.

To learn more about the contents of the GAPIMNY Records, located at the NYU Tamiment Library & Robert F. Wagner Labor Archives, view the collection’s finding aid.