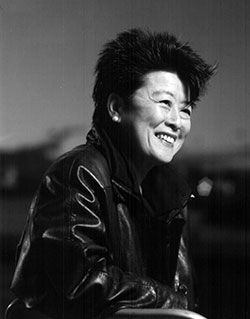 Helen Zia is the author of Asian American Dreams: The Emergence of an American People, (Farrar Straus and Giroux, 2000), which was a finalist for the prestigious 2000 Kiriyama Pacific Rim Book Prize. President Bill Clinton quoted from Asian American Dreams at two separate speeches in the Rose Garden. She is also coauthor, with Dr. Wen Ho Lee, of My Country Versus Me, (Hyperion, 2002). Their book reveals what happened to the Los Alamos scientist who was falsely accused of being a spy for China in the “worst case since the Rosenbergs.”

Zia is an award-winning journalist and a Contributing Editor to Ms. Magazine, where she was formerly Executive Editor. Her articles, essays and reviews have appeared in numerous publications, including Ms., New York Times, Washington Post, The Nation, Essence, OUT!, Social Policy, and the San Francisco Chronicle. She has contributed essays to several book anthologies, including Asian American Almanac; Making Waves; Ending Domestic Violence: The Global Frontlines; Report from Beijing: Journalists of Color at the Fourth World Conference on Women; The Price We Pay: The Case Against Racist Speech, Hate Violence and Pornography; and The Readers Companion to U.S. Women’s History.

For more than two decades, Zia has been a magazine writer and editor. She traveled to Beijing in 1995 to the UN Fourth World Congress on Women as part of a journalists of color delegation. In 2001, she was named one of the most influential Asian Americans of the decade by A. Magazine. She has received numerous journalism awards for her ground-breaking stories; her investigation of date rape at the University of Michigan led to campus demonstrations and an administrative overhaul of its policies, while her research on women who join neo-Nazi and white supremacist organizations provoked new thinking on the relationship between race and gender violence in hate crimes.

A second generation Chinese American, Zia has been outspoken on issues ranging from civil rights and peace to women’s rights and countering hate violence. Her work on the Asian American landmark civil rights case of anti-Asian violence is documented in the Academy Award nominated film, “Who Killed Vincent Chin?” In 1997 she testified before the U.S. Commission on Civil Rights on the impact of the campaign finance hearings on Asian Americans, and helped author a complaint to the Commission against Congress, the Democratic and Republican National Committees and the news media for their racially discriminatory treatment of Asian Americans.

Zia received an honorary doctorate from the Law School of the City University of New York in 2002 for bringing important matters of law and civil rights into public view. She is a graduate of Princeton University’s Woodrow Wilson School of Public and International Affairs, where she was a Woodrow Wilson Scholar and a member of the university’s first graduating class of women. She quit medical school after completing two years, then went to work as a construction laborer, an autoworker, and a community organizer, after which she discovered her life’s work as a writer.

In Her Own Words

I’m thrilled to be a part of the A/P/A Studies Program, which I’ve looked to for the latest research and innovative thinking on significant developments involving Asian Americans and Pacific Islanders. In a way, becoming a Writer-in-Residence at A/P/A Studies continues along working relationship which began several years ago, even before the book reading in 2000 that A/P/A Studies hosted for my first book, Asian American Dreams, and then again in 2002 for Dr. Wen Ho Lee and me with the only East Coast book launch of his autobiography. Being a Writer-in-Residence at A/P/A Studies will allow me to pursue my research and explore new directions among the talented and thoughtful scholar-activists of A/P/A Studies who also committed to bringing the many voices of our diverse communities into the center of American life. The residency allows me to come back to the city I first knew as a young activist in the early Asian American movement days and then as a journalist in the 1980s; it also brings me to my roots, where my parents first met in New York’s Chinatown. During my residency, I am hoping to engage our shared passion for a just and civil society to advance the understanding, inclusion, and participation of people from the Asian and Pacific diasporic experience.

We are delighted to have Helen Zia as our 2004-05 Writer-in-Residence.

What are the words we readily associate with “journalists” today? In this post 9/11 era of Bush/Cheney policies, the practice of “embedded reporters” immediately comes to mind. I also think of the explosion of corporate media “pundits” (a bastardization of an Indian term)?especially right wing talk radio with all that blather and little informed perspective. The phrase “yellow journalism” still resonates. With moguls like Rupert Murdoch, we are clearly living in an era of the military industrial entertainment complex. “Fair and balanced” indeed! Not people, or corporations, we trust.

What are the words I associate with Helen Zia? Integrity. She writes about what she believes in and believes in what she writes about. Smart. She offers analysis that helps to contextualize our everyday lives in relation to how power works. Articulate. Her crisp clear prose gets at complex ideas in a straightforward manner; prose that puts academic jargon to shame. Engaged. She’s a steadfast defender of those wronged by racism. She’s community-minded; always understanding of unrepresented perspectives and the need to get their voices out. I could go on, but you get the idea. In the past decades, Helen has steadfastly been a part of social movements for greater justice, equity, and freedom. From the murder of Vincent Chin in Detroit to the early days of Ms. Magazine, from the defense of Dr. Wen Ho Lee to advocating the rights of gay marriage; she’s there writing and reminding us about what’s important but not generally reported.

She’s independent journalism at its best.