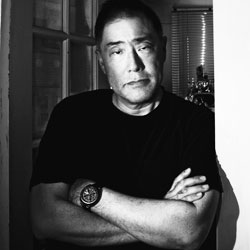 Larry Hama is a cartoonist, illustrator, writer, actor, and musician who has worked in the fields of entertainment and publishing since the 1960s. He is a third generation Japanese American (sansei) who was born in New York City and graduated from the High School of Art & Design in midtown Manhattan. He served in the US Army from 1969 to 1971, during the Vietnam War. Upon his discharge, Hama became, and remains active in the Asian American community in New York City.

During the 1970s, he was seen in minor roles on the TV shows M*A*S*H and Saturday Night Live, and appeared on Broadway in two roles in the original 1976 production of Stephen Sondheim’s Pacific Overtures.

While Hama has worked on numerous projects, he is best known to American comic book readers as a writer and editor for Marvel Comics, where he wrote the licensed comic book series G.I. Joe: A Real American Hero, and created the “file cards” on the backs of the Hasbro G.I. Joe toy packages. The comic ran 155 issues (February 1982-October 1994). He has also written for the series Wolverine, Avengers, Batman, Conan, The Punisher, Blaze, Nth Man, and Elektra. He created the character Bucky O’Hare, which was developed into a comic book, a toy line and television cartoon. Most recently, Hama is the writer of theBarack the Barbarian series, a Conan the Barbarian parody starring United States President Barack Obama.

Although most people who are familiar with his work think of Hama as a writer, he considers himself a “penciler with a wordprocessor,” since he visualizes his stories in his head first, as a series of images, and then describes that continuity in words. He refrains from calling himself an artist: “It’s a conferred appellation, not a job description.” He has many other curmudgeonly traits which need not concern us here, but admits to getting misty when former readers (now in their thirties and forties) tell him, “thanks for my childhood.”