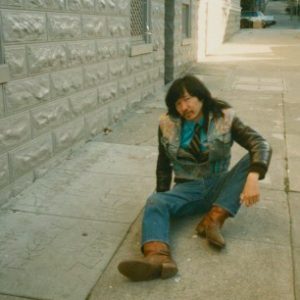 Martin Wong (1946-1999) was a Chinese American artist best known for legitimizing graffiti as an art form. Born in Portland, Oregon, he grew up in San Francisco’s Chinatown and, in 1968, graduated from Humboldt State University with a degree in studio art. Wong was part of the Bay Area’s performance art scene in the 1970s, but switched almost exclusively to painting upon moving to New York in the early 1980s. His best known works include cityscapes of New York’s Chinatown and the Lower East Side. He championed graffiti art as a legitimate art form, and incorporated homoerotic sensibilities into his paintings. Wong’s stylistic influences encompass an eclectic combination of pan-Asian art and culture (Tibetan and Chinese in particular), graffiti, comic books, and tattoos.

He befriended graffiti artists including “Daze” (Chris Ellis), “Lee” (Lee Quiñones), and “La Roc”/“LA2” (Angel Ortiz), and made efforts to publicize their works in exhibitions at the Museum of American Graffiti. Wong’s romantic relationship with poet and playwright Miguel Piñero, whom Wong met in 1982, also had a significant impact on his work, as they collaborated artistically throughout the 1980s.Wong was closely associated with the downtown galleries Semaphore, Exit Art, and PPOW, and his works were shown in the Metropolitan Museum of Art, New Museum of Contemporary Art, and New-York Historical Society. Wong died of an AIDS-related illness in 1999.

To learn more about the contents of the Martin Wong Papers, located at the NYU Fales Library & Special Collections, view the collection’s finding aid.