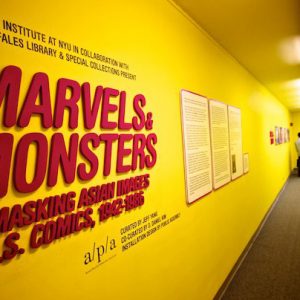 If there was any doubt that comic books provide a revelatory window on the American psyche, this exhibition will erase it.

Over four decades that included some of the most turbulent times in our nation’s history, science fiction author and cultural studies scholar William F. Wu painstakingly gathered an archive of comics distinguished not only by its size and reach, but by its scope: It is the world’s largest collection of American comic books featuring images of Asians.

The pulp phantasmagoria of Wu’s archive isn’t just a treasure trove for fans of graphic fiction, it’s also a unique look at America’s evolving racial and cultural sensibility – showing how images that began as racist and xenophobic propaganda during times of war and nativist unrest have coalesced into archetypes that in many ways still define our perceptions of Asian Americans today… images that distill the essence of tenacious stereotypes like that of the “perpetual foreigner,” the “exotic temptress,” the “wise guru” and the “devious manipulator.”

An avid comic book reader since his childhood in Prairie Village, Kansas, Wu found such archetypal images fascinating, but distressing in their universality and one-dimensional intensity. “I grew up reading comics and always loved them, but the Asian characters within them seemed to range from stupid to evil to banal, with few exceptions,” he says. Some might have chosen to avoid such images; instead, Wu sought them out, actively adding them to his collection.

After Wu graduated from the University of Michigan with a doctorate in American Studies – writing his dissertation on “Yellow Peril” imagery in 19th and early 20th century literature – his success in the world of speculative fiction led friends and fans to embrace his quirky interest in Asian comic book images, sending him works with which to swell his archive. As it grew, Wu realized his collection had grown from a hobby into a comprehensive documentary record of American popular culture during a period of intense Asia-related political engagement: the internment of Japanese Americans; the dropping of atomic bombs in Hiroshima and Nagasaki; wars in Korea and Vietnam; continued Cold War tensions with China; economic competition with Japan; and adaptation to skyrocketing immigration and growing populations of Asian Americans.

Wu was well ahead of the curve in recognizing the scholarly value and human interest of his collection. Though comics were largely seen as a marginal pursuit from the ‘60s through the ‘80s, the period during which Wu was most actively collecting, in their heyday – the late ‘30s to the 1950s – comic books were the nation’s most popular printed medium: A 1945 survey by the Market Research Company of America estimated that 70 million Americans, roughly half of the U.S. population, were comic book readers, including 95% of all boys and 91% of all girls. (By contrast, just 50 million Americans reported reading newspapers.)

And since Wu ceased collecting in 1986 – when he finally became overwhelmed by the sheer number of Asian images being published – the social influence of comics has rebounded to new heights. The icons and conversations of the comics have come to dominate multiplex screens and toy aisles. They’ve emerged as staple memes in fine arts and great literature. They even inform civil and political discourse, providing simple, muscular themes and metaphors that are increasingly being used to shape how domestic and foreign policy are positioned and communicated (is there doubt that the “Axis of Evil” was inspired by comics?).

“When I began this collection, it was because I realized that popular culture reaches virtually everyone,” says Wu. These iconic images – good and bad – can have real-world effects on people’s perceptions of themselves and those around them.”

With that in mind, this exhibition takes the most potent images from the thousands in Wu’s collection, and organizes them around the archetypes they reflect and sustain – the Alien, the Kamikaze, the Brute, the Lotus Blossom, the Guru, the Brain, the Temptress, the Manipulator – while placing them within both a historical context and a discourse with contemporary Asian American writers and creators.

The images may disturb and disquiet, coming as they do from a genre most associated with young readers. That is intentional: These images are our Rogues’ Gallery, our Legion of Doom – the supervillains we face in our individual and collective quest for truth, justice, and the Asian American way.

April 15-May 15, 2012 at the Multicultural Success Center, Indiana University-Purdue University in Indianapolis, Indiana

February 3-March 23, 2012 at the Asian Arts Initiative in Philadelphia, Pennsylvania

September 20-December 16, 2011 at the Asian/Pacific/American Institute at NYU in New York, New York