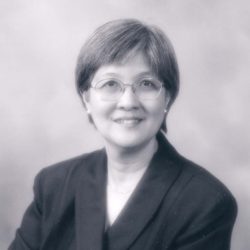 May Chen (b. 1948-) is a labor organizer who has advocated for immigrant workers for more than two decades. Born and raised in Boston, Massachusetts, she received her BA from Radcliffe College and her MA in Education at the University of California, Los Angeles. Her involvement in the labor movement began in 1983 with her membership in Local 23-25 and her work on the ILGWU (International Ladies’ Garment Workers’ Union) Immigration Project. The first union-initiated legal advocacy department for immigrant workers, the Immigration Project assisted members in applying for US citizenship, legalization, and sponsorship petitions on behalf of relatives. Chen has also been active in the Coalition of Labor Union Women, Asian Labor Committee of the New York City Central Labor Council, and AFL-CIO’s Asian Pacific American Labor Alliance (APALA), where she was a founding member and officer. Up until her retirement in 2009, Chen served as International Vice President of UNITE HERE and Manager of Local 23-25. She also served as Secretary of the New York Metropolitan Area Joint Board.

To learn more about the contents of the May Chen Papers, located at the Tamiment Library & Robert F. Wagner Labor Archives, view the collection’s finding aid.