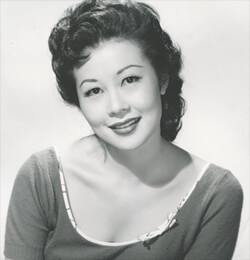 Michi Kobi (1924-2016), born Machiko Okamoto, was a Japanese American actress and activist. During World War II, she (along with 110,000 other Nikkei) was forcibly removed from her home and incarcerated at the Central Utah Relocation Center, a concentration camp in Topaz, Utah. She turned to acting while incarcerated and after the war pursued an acting career in New York, appearing in film and Broadway productions. Kobi also worked to draw attention to the injustices of Japanese American wartime incarceration, and in 1980 served as the co-chair of the East Coast Japanese Americans for Redress.

To learn more about the contents of the Michi Kobi Papers, located at the Tamiment Library & Robert F. Wagner Labor Archives, view the collection’s finding aid.