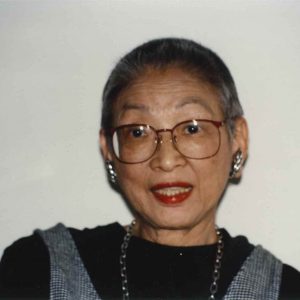 Midori Shimanouchi Lederer (1923-2005) was born and raised in Fresno, California, and was a student at the University of California, Berkeley, when she and her family were incarcerated at the Topaz War Relocation Center, a concentration camp, in 1942. Her 1943 appeal to the US government granted her permission to leave Topaz and resume her studies at Pace College in New York. In 1952, she became the secretary of renowned film producer Michael Todd and served as his production assistant. She later joined Bill Doll and Company, a top New York- based firm of press agents in 1960 and eventually rose to partner and vice president.

Lederer retired in 1971 and began channeling her energies toward community volunteer work. She volunteered at a drug rehabilitation agency in the Lower East Side, the Japanese American Help for the Aging, and the Japanese American Senior Support Group. She founded Japanese American Social Services, Inc. (JASSI) in 1981, and with volunteers Kimi Shimizu and Cyril Nishimoto and a small start-up fund, began providing free counseling services to Japanese seniors at her home. JASSI’s services quickly grew to encompass legal and immigration services; assistance to restaurant workers, abused women, and international students; and a support group in Japanese. In addition to her work with JASSI, she also served on the boards of the Asian American Federation of New York, The Methodist Church Home for the Aged, and the Japanese American Association of New York. She was the recipient of many honors in recognition of her work, including the Ellis Island Honorary Award, Justice in Action Award, and The Order of the Sacred Treasure from the Emperor of Japan.