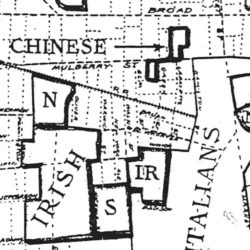 From 1870-1970, Newark, New Jersey was home to a Chinatown and small Chinese American community. Numbering only about 3,000 residents at its peak, it was one of the few East Coast Chinatowns to exist during this time period. Newark’s Chinatown was home to businesses, churches, and other social organizations that were created by and for Chinese Americans. However, the community drifted apart in the 1950s as many of its residents began moving to New Jersey’s suburbs. Despite its historical significance, Newark’s Chinatown had largely been forgotten.

When Yoland Skeete initiated the Newark Chinatown History Project, which incorporated both archival and archaeological research, interest in Newark’s historic Chinatown was renewed. Skeete scoured local churches, Newark’s public libraries, the National Archives and Records Administration, and the New Jersey Historical Society for records about Newark Chinatown. These documents were then copied and used to begin building the Newark Chinatown Collection. In addition to her archival research, Skeete spearheaded an archeological dig of the area, which unearthed privies and other objects, some of which are included in the collection. Skeete also conducted oral histories with former residents and their descendants.

The Yoland Skeete Research Files on Newark Chinatown is comprised of historical research files, photographic compilations, oral history documentation, and artifacts. Highlights from the collection include large quantities of individual immigration files from the Chinese Exclusion Act era and a photographic collection of the Chinatown’s residents from the 1920s-60s. Skeete’s extensive effort to reconstruct the history of a once thriving Chinatown community that existed in Newark from the 1870s through 1970s is reflected in the contents of this collection.