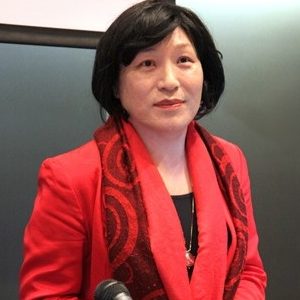 Pauline Park (b. 1960-) is a New York City-based transgender activist. She is the president of the board of directors and former executive director of Queens Pride House (QPH) and chair of the New York Association for Gender Rights Advocacy (NYAGRA), both of which she co-founded. She led the campaign for the transgender rights law enacted by the New York City Council in 2002, and in 2005 she became the first openly transgender grand marshal of the New York City Pride March. Park has written widely on LGBTQ issues and has conducted transgender sensitivity training sessions for a wide range of organizations. In January 2012, she participated in the first US LGBTQ delegation tour of Palestine and later that year she was named one of “The Most Influential LGBT Asian Icons” by Huffington Post and listed as one of “50 Transgender Icons” on Transgender Day of Remembrance. In June 2015, Park was the keynote speaker at the Queer Korea Festival/Seoul Pride Parade, the largest event in the history of the LGBTQ community in Korea at that time.

Her papers span the years 1990 to 2015 and contain materials on subjects such as transgender health, identity, community, and public policy. The collection includes correspondence, photographs, VHS tapes, certificates, audio recordings, original poetry and creative writing, flyers for events and conferences related to QPH and NYAGRA, newspaper clippings and magazine articles featuring Park, and letters to politicians and allied organizations advocating the passage of LGTBQ-inclusive non-discrimination legislation.

To learn more about the contents of the Pauline Park Papers, located at the Tamiment Library & Robert F. Wagner Labor Archives, view the collection’s finding aid.