A selection of A/P/A Institute titles are available for purchase in our online store.

Directions to My House is a collection of essays, poems, artworks, and personal photographs by the artist Zarina Hashmi with Sarah Burney.

“Memory is the only lasting possession we have,” begins Zarina, who was the A/P/A Institute at NYU 2017-18 Artist-in-Residence. In the pages that follow, she reflects on her life—her family’s experience during the 1947 Partition of India, her long career as an artist, and the many cities that she has called home. The book includes never-published material, and chronicles the artist’s travels and life around the world through multiple forms of expression.

Zarina, who was born in Aligarh, India in 1937 and who has lived and worked in New York for more than four decades, adopts the recurring themes of home, displacement, borders, refugees, and memory. 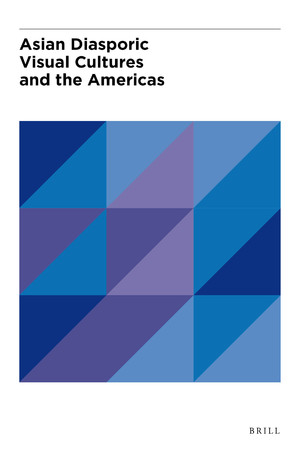 Asian Diasporic Visual Cultures and the Americas is a new peer-reviewed journal that features multidisciplinary scholarship on intersections between visual culture studies and the study of Asian diasporas across the Americas. Perspectives on and from North, Central and South America, as well as the Pacific Islands and the Caribbean are presented to encourage the hemispheric transnational study of multiple Americas with diverse indigenous and diasporic populations. The broad conceptualization of the Americas as a complex system of continual movement, migratory flows and cultural exchange, and Asian diaspora as an analytical tool, enables the critical examination of the historically under-represented intersections between and within, Asian Canadian Studies, Asian American Studies, Asian Latin American Studies, Asian Caribbean Studies, and Pacific Island Studies. The journal explores visual culture in all its multifaceted forms, including, but not limited to, visual arts, craft, cinema, film, performing arts, public art, architecture, design, fashion, media, sound, food, networked practices, and popular culture. It recognizes the ways in which diverse systems of visualities, inclusive of sensorial, embodied experience, have shaped and embedded meanings within culturally specific, socio-political and ideological contexts.

GAX: Ngā Tai o te Ao: Global Tides is the publication from the 2020 Global Asia/Pacific Art Exchange (GAX) presented in June 2020 by the Asian/Pacific/American Institute at NYU in collaboration with the School of Art and Design at the Wānanga Aronui o Tāmaki Makau Rau (AUT University) and Vā Moana Research Cluster. Edited by Alexandra Chang, Charlotte Huddleston, and Janine Randerson, the publication is available online.

Edited by John Kuo Wei Tchen and Dylan Yeats. The “yellow peril” is one of the oldest and most pervasive racist ideas in Western culture—dating back to the birth of European colonialism during the Enlightenment. Yet while Fu Manchu looks almost quaint today, the prejudices that gave him life persist in modern culture. Yellow Peril! is the first comprehensive repository of anti-Asian images and writing, and it surveys the extent of this iniquitous form of paranoia.

Written by two dedicated scholars and replete with paintings, photographs, and images drawn from pulp novels, posters, comics, theatrical productions, movies, propagandistic and pseudo-scholarly literature, and a varied world of pop culture ephemera, this is both a unique and fascinating archive and a modern analysis of this crucial historical formation.

This catalog features photographs of prints and objects from A/P/A’s inaugural gallery exhibition, Prints of Pop (& War), curated by Roger Shimomura, A/P/A Artist-in-Residence 2012-13. Contributors include Roger Shimomura, John (Kuo Wei) Tchen, Crystal Parikh, Tomie Arai, Luis H. Francia, Jennifer Hayashida, and others. Prints of Pop (& War) is a unique mini-retrospective exhibition of Roger Shimomura the artist, the collector, and the American boy. As a way to contest racism and a way to decolonize what we take for granted, the exhibition juxtaposed the ephemeral, politely hidden racist things that inspired Shimomura with his prints. We invited writers, artists, and scholars to respond to these juxtapositions and their responses, which include poetry, visual art, academic analysis, and personal reflections, are included in the catalog.

A is for Arab: Archiving Stereotypes in U.S. Popular Culture

Purchase A Is for Arab

In this book, author Alexandra Chang investigates “Asian American Art” through the formation, membership and artwork of three important post-’90s Asian American artist collectives: Godzilla: Asian American Art Network, Godzookie, and the Barnstormers. Through in-depth interviews with artists, arts administrators and writers, as well as the search for archival documents from university and museum archives to the storage shelves of participant artists, Chang traces the shifts within the changing historical contexts of the initial coinage of the term “Asian America.” We see how the term began as an outgrowth of the late ’60s civil rights movement, to its integration into mainstream multicultural discourse and its legacy today. Envisioning Diaspora peers into the nuances of artist collective formations and communities of affinity, and ultimately the core issues of identity politics, aesthetics, and diaspora involved in Asian American Art. With a foreword by Margo Machida.

To purchase this book, email apa.institute@nyu.edu.

A visual essay commemorating the exhibition Archivist of the Yellow Peril: Yoshio Kishi Collecting for a New America (2005-6), which was curated by John Kuo Wei Tchen, with assistance from NYU alumni Dylan Yeats and Anne Kim. The book features images of yellow peril items that were included in the exhibition, and which are contained in the Yoshio Kishi / Irene Yah Ling Sun Collection (made possible in large part by a donation made in memory of Dr. Wei Yu Chen). The book’s essay is written by Dylan Yeats with a foreword by John Kuo Wei Tchen and photographs by Peter Wing. All proceeds from this publication go towards funding the archives-building projects at the A/P/A Institute at NYU. 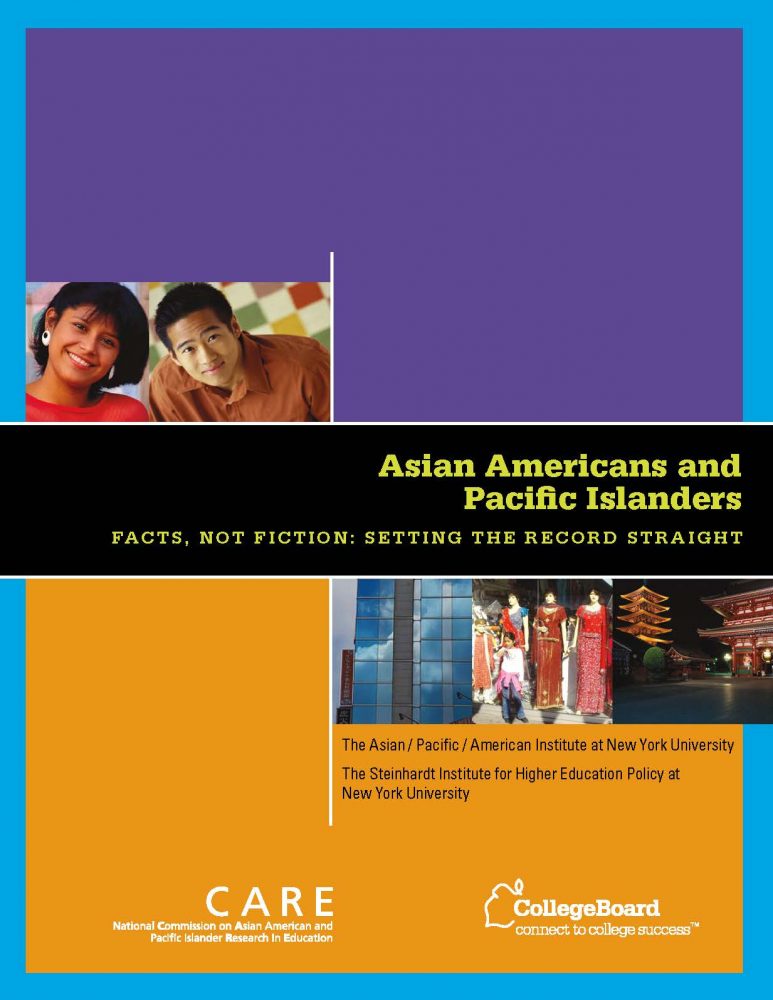 The National Commission on Asian American and Pacific Islander Research in Education (CARE) was formed through a collaboration of the Asian/Pacific/American Institute at New York University, the Steinhardt Institute for Higher Education Policy at New York University, and the College Board. Through this research report, the Commission seeks to improve U.S. education for all students by expanding the way education leaders, federal and state policymakers, and the public understand the complexities, inequities, and strengths of the U.S. educational system. This report is intended to encourage realistic and actionable discussions about how societal distinctions of race, class, ethnicity, language, and other cultural factors are constituted in the day-to-day operations of American schools. We believe that more frank and inclusive dialogues will lead to more effective and equitable policies.

Vestiges of War: the Philippine-American War and the Aftermath of an Imperial Dream, 1898-1998 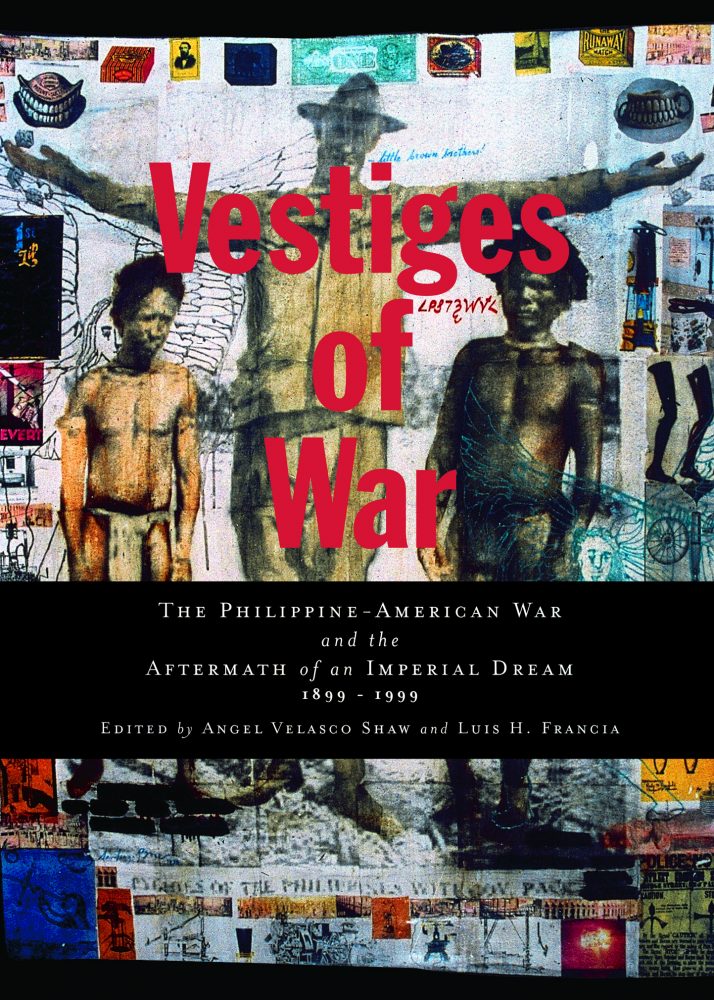 Co-edited by Angel Velasco Shaw and Luis H. Francia, Vestiges of War: the Philippine-American War and the Aftermath of an Imperial Dream, 1898-1998 is a groundbreaking, multidisciplinary anthology which examines the lingering impact of American colonialism on Filipinos and Filipino Americans, politics, pop culture, and the arts. Book contributors include Renato Constantino, Reynaldo Ileto, Doreen Fernandez, Guillermo Gomez-Pena, Manuel Ocampo, Nguyen Qui Duc, Vicente Rafael, and Yong Soon Min, among many others.

To purchase this book and have 100% of the proceeds go towards the A/P/A Institute, email apa.institute@nyu.edu.

Redistricting and the New Demographics: Defining “Communities of Interest” in New York City 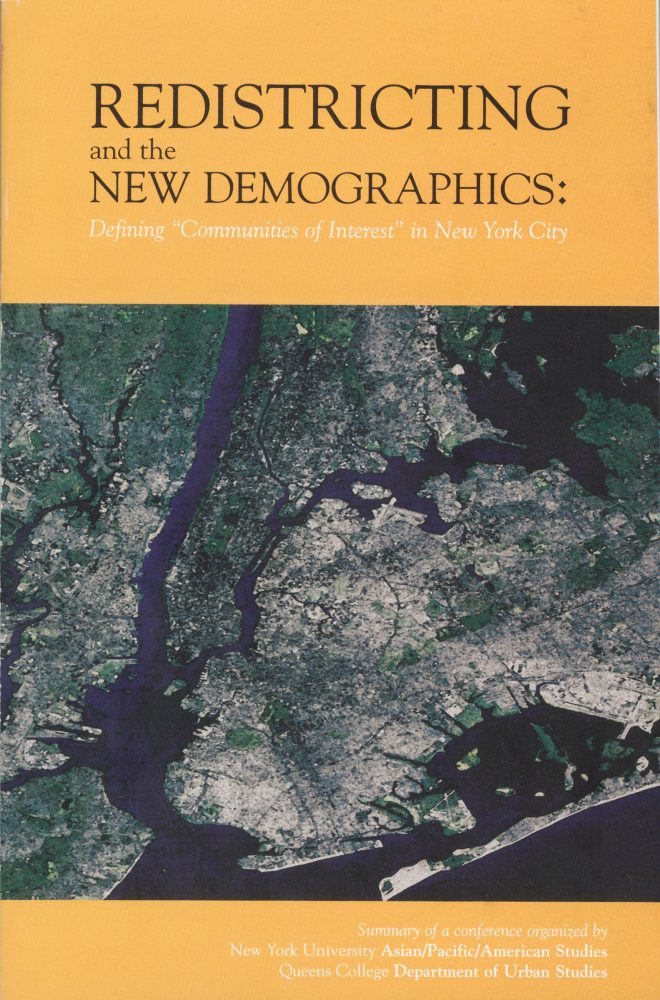 Every ten years the Federal Census accounts for how many people live in any given place. Then public officials redraw the boundaries of the electoral districts. Elections are then held where citizens are supposed to elect their representative. Res publica (literally “matters of the public”) not only depends on a fair-minded political representative but on an informed and active citizenry in regular communication with their representative. Will districts be formed to maximize the chances for all New Yorkers to be fairly represented? Redistricting is at the heart of this process. In historical practice, especially during times of rapid immigration and racial segregation, there have been gaps between who is and is not represented and therefore how the common good is defined. Post 9/11, we returned to issues of race, immigration, and political representation. As gaps between the wealthy and poor, the represented and the unrepresented become more extreme, we need to come together and explore what is going on and what needs to be changed. In 1999-2000, urban planner Professor Tarry Hum took the lead in organizing a series of panel discussions bringing together a mix of locally oriented researchers, practitioners, and experts to think and talk through the issues are. These summations are drafted in this publication by Professor Hum, and are intended to contribute to the necessary public dialogues ahead.