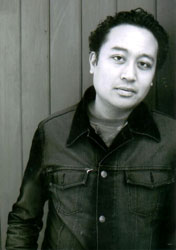 Regie Cabico is a spoken word pioneer having won top prizes in the 1993, 1994 and 1997 National Poetry Slams. His work appears in over 30 anthologies including Aloud: Voices from the Nuyorican Poets Café, Spoken Word Revolution and Slam. He has appeared on two seasons of HBO’s Def Poetry Jam, PBS’ “In The Life” and MTV’s “Free Your Mind” Spoken Word Tour. Regie is the recipient of three New York Foundation for the Arts Fellowships for Poetry and Multi-Discplinary Performance. As a theater artist, his work has been presented at The Humana Theater Festival, Genesis Theater Festival, CrossRoads Theater, Kennedy Center Play Lab, The Kitchen and Dixon Place, among others. He is an ensemble member of the NY Neo Futurist’s production of Too Much Light Makes The Baby Go Blind. He teaches writing and performance for Urban Word, NYC and hosts The Friday Night Series for the Poetry Project at St. Mark’s Church.

Most recently, Regie was the recipient of the 10th annual Writers for Writers Award sponsored by Poets & Writers. The award honors authors who have given generously to other writers or to the broader literary community.

In His Own Words

My senior role at Bishop McNamara High School was the lead in Dracula. I was hoping to get my big stage time, instead Dracula appears briefly in a few scenes and gets stabbed. That’s been a metaphor and a catalyst for my career and work. After studying acting at NYU’s Tisch School of the Arts, there were little opportunities for me except law school or getting a massage license. I picked up (the now defunct) Poetry Calendar and went to every open mic. This road map to the cafes of Alphabet City was the journey to expressing who I was with no rules, performing in the poetry slam at The Nuyorican Poets Café was like delivering my own showstopper. Where do you go if you’re a young Filipino guy in NYC circa early 90s?

I still believe that gay, Asian men are still hidden in art and mass media and I continue to explore not just race but sexual identity in post 9-11 New York. The political power struggle of creating in a Manhattan full of 7-11s and Disney has made theater and poetry a giant Vegas amusement park. In the Def Jam Poetry era there’s a lack of sincerity existing in the poetry slam scenes full of formulaic anaphoras, faux spirituality and angst. Personally, to get scored before strangers, I need to bleed on stage. Can I make an audience laugh and cry from my own life? Growing up in southern Maryland that was half African American, half red-neck and under the guidance of Filipino conservative Catholics, I was my own freak. Developing a sense of humor was necessary for survival.

No one knows what to do with spoken word. Publishers are wary of it and feel that it cannot stand alone on the page. Go to Virgin Mega Store and see what’s under spoken word: a Pope John Paul CD reciting the rosary and Hillary Clinton reading from her book. After being the first Asian American poet to take top honors in the National Poetry Slam, there have been tribes of young Asian poets flourishing in the scene. Their work needs to be archived. Otherwise, they’d get lost, lost the way I was a decade ago. My high school drama teacher, Mr. Beard, did not know what to do with me and that’s what spoken word is to the masses. I’m indefinable and I like that.