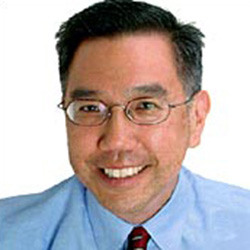 Rocky Chin (b. 1947-) is a civil rights attorney and community leader long engaged in labor and human rights advocacy. Born in Washington, DC, Chin earned his BA at Lehigh University, MA at Yale University, and JD at University of Southern California. He was appointed as director of the Office of Equal Opportunity and Diversity at the New York State Division of Human Rights in 2007, and previously served as assistant deputy commissioner for Community Relations at the New York City Commission on Human Rights during the mayoral administration of David N. Dinkins.

Chin’s activism began in the 1970s and 1980s with his involvement in the Asian American studies movement and the New York-based grassroots collective, Basement Workshop. Chin has since played an integral role in forming and leading A/P/A coalitions. In 1989, he spearheaded the founding of the Asian American Bar Association of New York. He also served in organizations such as Leadership Education for Asian Pacifics, National Asian Pacific American Bar Association, Asian American Arts Alliance, New York’s “Jobs with Justice” campaign, and Asian Pacific American Labor Alliance. In addition to his work with community organizations, Chin was also involved in politics where he coordinated support for Jesse Jackson and David N. Dinkins during their New York City campaigns, served as treasurer to Judge Doris Ling-Cohan, and was a campaign manager for Sau Ngar Li and Danny Yip. In 2001, Chin ran for New York City Council, becoming one of the few Asian Americans to do so.