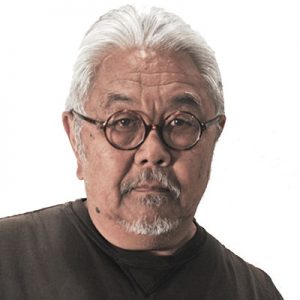 Roger Shimomura’s paintings, prints, and theatre pieces address sociopolitical issues of ethnicity. He was born in Seattle, Washington and spent two years of his early childhood in Minidoka (Idaho), one of ten concentration camps for Japanese Americans during World War II.

Shimomura received a B.A. degree from the University of Washington, Seattle, and an M.F.A. from Syracuse University, New York. He has had over 135 solo exhibitions of paintings and prints, and has presented his experimental theatre pieces at such venues as the Franklin Furnace, New York City, Walker Art Center, Minneapolis, and The Smithsonian Institution, Washington, DC. He is the recipient of more than 30 grants, of which four are National Endowment for the Arts Fellowships in Painting and Performance Art. Shimomura has been a visiting artist and lecturer on his work at more than 200 universities, art schools, and museums across the country. He is the recipient of awards from the College Art Association, Seattle Urban League, Kansas Governor’s Office, Asian American Ats Alliance, University of Washington and, in 2011, was designated a United States Artist Fellow.

Shimomura began teaching at the University of Kansas, Lawrence, Kansas in 1969. In the fall of 1990, Shimomura held an appointment as the Dayton Hudson Distinguished Visiting Professor at Carleton College, Northfield,Minnesota. During his teaching career at the University of Kansas he was the fist faculty member in the School of Fine Arts ever to be designated a University Distinguished Professor (1994). He also received the Higuchi Research Prize (1998) and the Chancellors Club Career Teaching Award (2002). In 2004 he retired from teaching and started the Shimomura Faculty Research Support Fund, an endowment to foster faculty research in the Department of Art.

Shimomura is in the permanent collections of over 85 museums nationwide. His personal papers and letters are being collected by the Archives of American Art, Smithsonian Institution in Washington, DC. He is represented by the Flomenhaft Gallery, New York City, Greg Kucera Gallery, Seattle, Eight Modern Gallery, Santa Fe, and Byron C. Cohen Gallery, Kansas City.

I was born in Seattle, Washington and have been living in Lawrence, Kansas since 1969, retiring in 2004 as Distinguished Professor of Art Emeritus. My wife, the artist Janet Davidson-Hues, and I built and live in a 5,000 square foot house/studio in Lawrence, and we also maintain residences in Seattle and New York City.

I am honored to be selected Artist-in-Residence for the A/P/A Institute for the 2012-2013 academic year. As a full-time artist and former artist-educator, I look forward to sharing my experiences with the larger community of A/PA supporters. Equally challenging will be the special opportunity to inaugurate the exhibition space in the A/P/A Institute’s new permanent home on the Washington Mews. For this occasion I am planning a mini-retrospective exhibition of my screen prints and lithographs with a special twist that I hope will enrich the understanding of the works on display. As a lifelong collector of Americana, it was inevitable that the images of many of these objects would work their way into my paintings, prints, and performances. I will start by selecting sample prints from the various themes that I have worked on since the late 1960s. Alongside each print, I will situate a two- or three-dimensional object(s) that was inspirational or related to the genesis of the print concept. Hopefully this arrangement will encourage opportunities for some fresh and interesting dialogue on popular culture and its interaction with the fine arts.

I look forward to the events this year and the opportunities to share some experiences gained from a long career in the studio and classroom.

Excerpted from The Prints of Roger Shimomura by Emily Stamey (University of Washington Press, 2007)

Best known as a painter and theatre artist, Roger Shimomura explores his Japanese American identity through a vibrant and provocative stylistic combination of twentieth-century American Pop art and traditional eighteenth- and nineteenth-century Japanese woodblock prints. Although the literature on Shimomura never fails to mention his appropriation of Japanese prints, it often ignores the artist’s own works on paper. Reviews of specific exhibitions end to consider Shimomura’s prints carefully, but discussions of his work as a whole rarely make them the subject of sustained analysis.  Whether working on canvas or paper, Shimomura uses the same visual vocabulary. One findselements gleaned from other artists: Andy Warhol’s celebrity portraits and Roy Lichtenstein’s benday-dot brush strokes; comic-book heroes including Mickey Mouse, Superman, and Dick Tracy; and the Kabuki actors, courtesans, and silhouettes of Mt. Fuji found in traditional Japanese prints. One also discovers Shimomura’s own signature depictions of American and Japanese figher planes; dividing structures such as barbed wire, brick walls, and shoji screens; and domestic items, including rice cookers and tubes of lipstick. A study of the consistent use of these images in both the paintings and prints, regardless of medium, reveals the artist’s investment in this complex personal iconography of popular images and ordinary objects.

Things haunt us. Like these masks. Just about any mask, but these in particular. Why!?

Halloween time. I grew up with kids wearing those grotesques, walking the sidewalks of our prairieland on the outskirts of Chicago. Park Forest was a model post-Korean War suburb where those considered hyphenated ethnics, with names like Marzano or Gapinski or Schlossberg, moved – away from their urban ethnic neighborhoods. Here they became 100% American.

We had one of the fist outdoor shopping malls. I grew up in a “Cape Cod” tract house that was like all the other houses on Central Park (without the park). Nothing fancy by today’s standards or even then, but during the era of racial covenants this ‘burb was different for two reasons most of us didn’t quite realize. In a time when immigration laws privileged the imagined “Nordic” race over Eastern and Southern Europeans, this was a place returning ethnic and working class GIs could afford to start a family. And it was developed by Jewish builders. A group of young professional Chinese immigrants asked for permission to move in. No Blacks yet. Racial otherness has always been layered.

It wasn’t the masks so much, but the older kids who wore them. In this Dream America, the ritual of whiteness was enacted through these objects – designed in the U.S.A., “Made in Japan,” and animated by wisecracks. There was a rigid pecking order even in this melting pot of Protestants, Catholics, Jews. Life was made more complicated by their dad’s war stories of “commies” in Korea or the Saturday afternoon airings of Charlie Chan with bug-eyed comic relief sidekick Mantan Moreland.

To collect artifacts from this storyscape is an act of defiance. It’s o gain power over their conventional stereotypic associations, and to challenge their power-laden meanings. These masks assembled together enable all us hauntees, from our various experiential locations, to detoxify. This is the power and eloquence of Roger Shimomura’s creative vision.

Things haunt Roger also. But through his righteous paintbrush, the buck-teeth, the squint, the bow, the moustache, the kimono, the thousands of tsotchke-fied racistgestures out there have been transmuted into powerful vaccinations. Through his anti-bodied paintings, we get immunized.

The A/P/A Institute is honored to have Roger Shimomura inaugurate our new space on the Washington Mews. He is a pioneering artist who shares our commitments. Decade-after-decade, he’s been unpacking and re-constructing what’s happened in that thingified landscape of the American dreamscape while also hallenging those thousand-and-one racial slights. Like a great alchemist, he turns dross into something invaluable.

With Roger, these cruel childhood tortures have a cure! Doctor S is in the house.