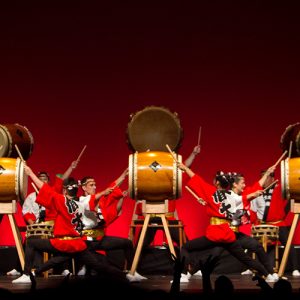 Formed in 1979, Soh Daiko was the first taiko group on the East Coast. Soh Daiko and taiko drumming offer a striking and powerful rebuff to stereotypical notions of Japanese and Asian American women as quiet and demure. Taiko has deep roots in Japan, but is relatively new to North America. It was first introduced in San Francisco, California in 1968 by drum master Seiichi Tanaka, and now there are more than one hundred groups across the US. Originally composed of members of the New York Buddhist Church, Soh Daiko members now hail from a variety of ethnic backgrounds and religious traditions. They receive instruction on drum building, basic taiko skills and philosophy from senior members and visiting expert drummers, and learn to play a varied repertoire that includes traditional, adapted, and original pieces composed by members. In addition to the traditional drums of varying sizes, Soh Daiko incorporates other instruments from around the world. The result is their own unique sound that preserves an ancient tradition, and blends energetic sounds, movement, and rhythm to create an art form that is uniquely Asian American. The group has performed at many prestigious venues, various festivals and benefit concerts, appeared on several television shows, and has received favorable reviews by national publications like the New York Times and Dance Magazine.

To learn more about the contents of the Soh Daiko Records, located at the Tamiment Library & Robert F. Wagner Labor Archives, view the collection’s finding aid.