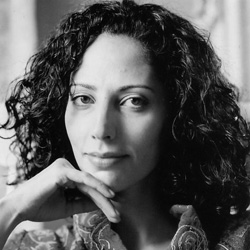 Suheir Hammad is a Palestinian-American poet, author and political activist who was born on October 1973 in Amman, Jordan to Palestinian refugee parents and immigrated with her family to Brooklyn, New York City when she was five years old.

She is the author of breaking poems, recipient of a 2009 American Book Award, and the Arab American Book award for Poetry 2009. Her other books are ZaatarDiva, Born Palestinian, Born Black and Drops of This Story. Her work has been widely anthologized and her produced plays include “Blood Trinity” and “breaking letter(s),” as well as the libretto for the multimedia “Re-Orientalism.”

STATEMENT FROM THE DIRECTOR
We welcome back Suheir Hammad. Suheir was an “Emerging Artist” with us back in 2001. She returns with an impressive, ever growing range of accomplishments. Yet what I most admire is her continued drive to ask questions that get beneath the surface frictions of our unquestioned assumptions, wars, national interests, and even the very form of our communications.

Perhaps many, used to their preconceived notion of what “Asian American” means, will be surprised that Palestinian-Brooklynite Hammad is our 2010-11 A/P/A Institute Artist-in-Residence. If so, that’s great. Then we are challenging the too-settled answer to the question: What constitutes an “Asian American”?

For many, “Asian American” is simply a technicality, an antiquated racial category defined by the U.S. Government, a box checked for the Census. For first-generation migrants, it often makes no sense at all. My parents thought of themselves as Chinese urbanites in exile even after they became U.S. citizens. To identify as Asian or Asian American made no sense. Yet, for the experience of my generation, in a different place, a different time, Asian American is a necessity in the fight against racism.

Suheir Hammad’s family-from Palestine via Jordan to Brooklyn. They joined the displaced Arab and Muslim communities who had lived and worked in the much beloved Washington Market until Nelson Rockefeller built his World Trade Center.

Suheir’s performances, poetry, and life’s work defy simplistic “either or” categorizations. She identifies with Brooklyn and not simply New York City, as Palestinian American not simply American, as a woman of color and not just a universal womanhood… You get the idea.

This is why Suheir Hammad’s A/P/A Institute Artist-in-Residence focus on the story of the Queen of Sheba is so fascinating and important. This ancient story has been told by those we’d now deem Africans, Asians, Mediterraneans, and Europeans-people of different languages and cultures with little awareness beyond “their” particular version. Hence her key words, spoken and written: repetition, variation, a natural arc, arcs of myth and… math.

Yes, math! Besides goods and people, mathematical ideas and “Arabic numerals” migrated in the Indian-Persian worlds before the Christian era, and were eventually adopted by Italians. Indeed, Suheir is drawn to what is called the “Fibonacci sequence”-a numerical sequence-a naturally occurring mathematical series often illustrated as the spiral of a seashell but also used for millennia in Indian oral prose traditions.

For both the Sheba story and the repetition of the spoken sequence, these maneuvers, to and fro, between particularity and commonality of larger ancient/contemporary stories and forms-each version distinctive, yet part of a grander yet unacknowledged tradition- is potentially of great value for those nurtured on such practices, historically and today. And it is of great value metaphorically for us all.