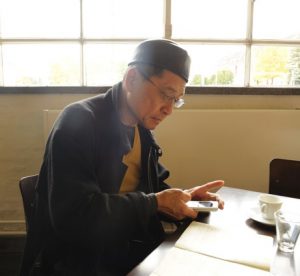 History: David Diao was born in 1943 in Chengdu, Sichuan, China. Recognizing a growing threat in the changing political climate, his parents sent him from Chengdu on the eve of its Liberation in Oct. 1949 to Hong Kong to live with his grandparents. In 1955, he arrived in New York City at the age of 12 to join his father, a civil engineer just finishing up on the design of the Tappan Zee Bridge for which he was responsible for the main cantilever span.

Well respected as an artist whose provocative works reflect theoretical breadth and technical mastery, Diao’s interests and approaches have developed over his career. After studying art and philosophy at Kenyon College, Diao began working at the influential Sam Kootz Gallery (the first to exhibit Picasso in the U.S.) where he immersed himself in abstract expressionism. Since the 1960s, Diao has actively engaged with questions across multiple movements and traditions; formalism, modernism, minimalism, abstract expressionism are only some of the commonly used categories and concerns.

In recent years, Diao has become concerned with the memory of modernism itself. Reflecting on the demise of domestic, modernist architecture, Diao illustrates their contribution in mixed pieces that systematically erase or emphasize their place in the contemporary landscape. In another key piece called “That Close!” (2002), Diao speculates on the degrees of Jackson Pollock’s influence by depicting the grave sites of artists following Pollock (e.g., Stuart Davis, Frederick Kiesler, Frank O’Hara, Ad Reinhardt, Jimmy Ernst, Lee Krasner, Elaine de Kooning, Hannah Wilke, and Henry Geldzahler) in successive circles radiating from Pollock’s grave (marked “1”).

On a more personal level, Diao has given increasingly more attention to his personal and family memories around his exodus from China, just before the takeover by communists in 1949.

Diao’s works have been exhibited in shows around the world and can be found in prominent collections, including the Museum of Modern Art, the Albright-Knox Art Gallery, the Whitney Museum of American Art, the Art Gallery of Ontario, and Museum of Modern Art of Saint-Etienne (France). A teacher for many years in the Whitney Museum of American Art’s independent study program, Diao’s many honors include grants from the Guggenheim Foundation and the National Endowment for the Arts.

Summary: The papers of David Diao measure approximately 3.0 linear feet. Approximately 1.0 linear foot consists of grant applications and materials related to grant projects. Another 1.0 linear foot consists of financial records and correspondence. In addition, there are significant quantities of digital files, including letters (on a computer) and photographs of completed works (on 6 DVDs).