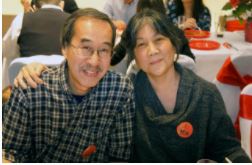 Date Range: 1971 – 2009
Survey Conducted: Wed, 2009-03-11 and Wed, 2009-04-08
Creator: Arai, Tomie and Wong, Legan
History: Artist and community activist Tomie Arai was born in New York City in 1949. A third generation Japanese American, her parents are from Hawaii and California and her grandparents were farmers who settled in the country in the early 1900s. Her experiences growing up Asian American in New York City deeply color her work as an artist, as many of her works deal with the urban experience and attempt to make connections to her family and community through art.
At the time she began to pursue a career in art in the late 1960s and early 1970s, her feeling that the New York art world failed to address her experiences as an Asian American and woman of color propelled her to become involved in community art. She joined the Basement Workshop in 1972 and there, learned about Asian American activism and making art along with other Asian American artists. Between 1972 and 1979, Arai worked at Cityarts Workshop as a resource center coordinator and mural director, painting a series of community murals in New York City’s Lower East Side. Cityarts’ first project in Chinatown ( A History of Chinese Immigration to the US) involved mostly Basement Workshop members. After Cityarts, Arai worked as a freelance graphic artist for Alan Okada of Citibank. At the time, Arai created posters, brochures and promotional materials for community groups as part of Citibank’s Graphic Support program. In the 1980’s, Arai began to focus on printmaking. As a keyholder and Board Member of the Lower East Side Printshop for over 15 years, Arai also participated in print residencies at the Women’s Studio Workshop, the Printmaking Workshop, the Center for Exploratory Photography and Art in Buffalo, and the Brandywine Workshop in Philadelphia. These non-profit workspaces encouraged artists to collaborate and experiment with the printed image.As an artist, Arai has been an avid proponent of making art in spaces outside of the hierarchical gallery and the need to redefine art and its relation to community. Instead of the historical paradigm of public art as a monumental sculpture placed in a site with no connection to the community, she advocates community-based art created through a dialogic process between artist and community members whose end goal is creating art with which the community feels ownership. She stresses that artists need to build relationships with organizations and communities. She has created community-based works such as “Swirl” a public sculpture in Philadelphia that helps bring to the fore the less visible history of Chinese Americans in the nation’s founders’ city, and a variety of other works commissioned by the Arizona Humanities Council, Cambridge Arts Council, the Bronx Museum of the Arts, and the National Endowment for the Arts.In addition, Arai has created site specific public works of art commissioned by the New York City Department of Cultural Affairs’ Percent for Art Program, the General Services Administration of the Federal Government, and the NYC MTA Arts for Transit Program that deal with community themes.

An Asian American activist who participated in the political movements of the 1960s, Arai is still engaged in community work. She sat on the Boards of the Museum of Chinese in the Americas, where she served as its first artist-in-residence, the Lower East Side Printshop, Printed Matter, and the Bread and Roses Cultural Project of the 1199 Health and Hospitals Workers Union.

She has been a recipient of two New York Foundation for the Arts Fellowships in Printmaking, a 1994 National Endowment for the Arts Visual Arts Fellowship, and a 1995 Joan Mitchell Visual Arts Grant. She served as NYU Asian/Pacific/American Institute’s first Artist-in-Residence in 1997-1998 and in 2005, served as Artist-in-Residence at Philadelphia’s Asian Arts Initiative. Through her body of work utilizing silk-screening, site-specific installations, collections of oral histories and community memories and images, Arai explores the relationship of art to history and the role that memory plays in retelling a collective past. Her work demonstrates her persistent commitment to documenting and reclaiming a variety of peoples’ untold histories while it simultaneously also engages viewers in dialogue with contemporary social struggles.

Legan Wong was born on January 19, 1951 in Brooklyn, New York as the eldest child of immigrant parents from Taishan, Guangdong Province, China. He was named after a U.S. Army nurse surnamed Egan, who cared for his 19-year-old father after he was wounded in Saipan in the Pacific front during WW II. His father immigrated to the U.S. in 1935 as a boy and worked as a laundryman and in various Chinese restaurants as a waiter, bar tender and manager. His mother immigrated in 1949 and worked as a seamstress in garment factories. The family lived in Crown Heights, Brooklyn until 1964 and ultimately settled in Elmhurst, Queens. Wong is married to artist and activist Tomie Arai. They have two children, Masai Williams and Akira Wong, and two grandchildren, Kai and Kenji Williams.

Wong was active in the New York Asian American Movement during the 1970s and 1980s. From 1971 to 1973, he served as one of two office coordinators for Basement Workshop at 26 Catherine Street after its move from the basement of 54 Elizabeth Street. Basement Workshop was comprised of professionals, college students and young activists who were involved in the various divisions of Basement, including Bridge magazine, Amerasia Creative Arts, Asian American Resource Center and Asian Children’s Underground. Wong was active in the Asian American Resource Center.

During this period, Wong also worked on various projects to promote the development and expansion of Asian American Studies. In the late 1960’s and early 1970’s, Asian American Studies was in the early stage of development, with programs available in a number of colleges and universities in California and only one in New York City (at City College). At that time there was resistance on the part of college administrators to implement courses of study on their belief that there existed no academic legitimacy and interest from students for these courses. Wong’s activist work included several conferences, including “Through Our Own Eyes: An Asian American Conference” held at Pace College on April 15-16, 1972 and attended by hundreds of student activists from Mid West and East Coast colleges and universities, and the May 6, 1974 “Asian American Curriculum Development Workshop,” organized for New York City public school officials and teachers interested in incorporating Asian American themes in the public school curriculum.

From 1972 to 1973, as an undergraduate at Queens College, NY, Wong developed the curriculum and taught the course “The Asian American Experience” in the Honors & Interdisciplinary Program. Between 1973 and 1976, Wong served as an adjunct lecturer at Hunter College, NY in its Department of Black & Puerto Rican Studies. After a departmental review of the curriculum and proposed lectures, he was hired to teach the course “The Asian American Experience,” a historical and contemporary examination of the experiences of Asians in America. Within the department, Wong also worked on curriculum development and designs for other possible Asian American courses.

Between 1972 and 1974, Wong was a member of Asians in the Spirit of the Indo-Chinese (ASI), a collective of Asian American activists involved in the Viet Nam anti-war movement. In 1974, he worked with Asian Americans for Equal Employment (AAFEE) on its campaign to get construction jobs for Chinese workers and to expose the racism of the construction industry at the building site of Confucius Plaza. In 1975, when the organization changed its name to Asian American for Equality (AAFE), Wong became involved in its organizing of demonstrations against police brutality.

Between 1982 and 1985, Wong worked as one of the executive producers of East West World Records. The record company produced the album “Back to Back” featuring the songs of Chris Iijima and Charlie Chin and “Vision & Dreams” performed by the Los Angeles-based Asian American jazz fusion band, Visions.

Wong was also a member of Soh Daiko, a taiko group based at the New York Buddhist Church. At the time of its founding, Soh Daiko was the only taiko group on the East Coast.

Lewis, Diane E. “Outside A Closed Circle Artists of Color Say They Must Fight Against Subtle Yet Pervasive Racism.” Boston Globe, January 8, 1991.

Summary: The Tomie Arai and Legan Wong Papers totals approximately 21 linear feet and documents Arai and Wong’s activist work in the mural, anti-war, Asian American Studies, and greater Asian American movements in New York. Although the bulk of the material spans in date from 1971 to 2009, present are older materials relating to Arai’s parents and uncle, including drawings her uncle rendered during his internment, first edition books—some out of print—that her mother collected on Japanese Americans, and woodblock prints from the Nisei Progressives, an organization, based in New York, which advocated citizenship rights for the Issei, of which her parents were a part before the McCarthy era. The oldest of the materials that directly pertain to Arai’s work consists of documentation of the Basement Workshop, which Wong joined in 1971 and Arai in 1972. These materials include old posters, original art Wong created for its seminal publication Yellow Pearl, and other memorabilia.

Approximately half of the collection documents Arai’s work as an artist-activist. These include actual art work and records of her shows, including announcements and other press materials, correspondence, catalogs and books featuring shows that included Arai’s work or that she helped co-curate. Present is also documentation of specific projects Arai worked on. These include records from her work at the Museum of Chinese in America (then the Chinatown History Museum) as its first artist-in-residence and documentation of her “Memories of New York Chinatown” project, in which she designed 45-ft silk-screened banners to commemorate the museum’s opening in the former P.S. 23 building on June 23, 1991. Present are also Arai’s personal research files for her government-contracted mural for the African Burial Ground. At the time Arai accepted the commission, she found that not much had been written about New York during the colonial period and so had to conduct extensive background research for the project. Her files pull together resources and information Arai managed to unearth during her research. Records of her “Double Happiness” project include transcripts of interviews Arai conducted with 40 individuals of Chinese Latin American and Caribbean heritage from Miami and New York. There is also documentation of Arai’s involvement in the mural movement in the 1970s, including books documenting murals—some no longer standing—and two editions of mural manuals published by the Public Art Workshop in 1973 and 1975. Arai’s reference and source materials, including news clippings, books, and slides are also included. Arai has also amassed a collection of announcements spanning from the 1970s to1990s of art exhibits and various other events relating to the arts, Asian Americans, and other subjects that Arai thought was interesting.

Approximately 3 linear feet of the collection consists of publications by groups, often very temporary, with a leftist agenda. These include publications such as Upfront, which protested U.S. intervention in South/Central America, Heresies, a magazine on feminist politics and the arts, East Wind magazine, Bridge magazine, The Forgotten Minority, Asian Americans for Action newsletters, and Grace Lee Bogg’s Asian Americans & the U.S. Movement (Asian Americans for Action, 1973). Legan’s interest in the Asian American Studies Movement led him to collect various leaflets about the college activisms happening on different campuses. There are also photographs of Soh Daiko, Godzilla, Chris Iijima, Charlie Chin, Yuri Kochiyama and other groups and individuals with whom Arai and Wong associated.