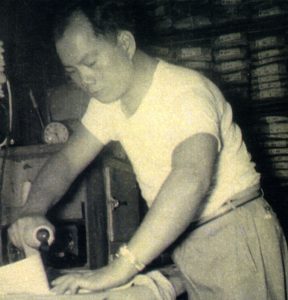 History: Tung Pok Chin (1915-1988) was born in Taishan County in Guangdong, China and immigrated to the U.S. in 1934 as a “paper son” to circumvent the Chinese Exclusion Acts. He worked in laundries during brief periods of residence in Boston and Rhode Island, and later established his own laundry business in Brooklyn, New York, with the assistance of the Chinese Hand Laundry Alliance (CHLA). In his spare time, he studied English, read Chinese literature, and wrote prose and poetry. In 1937, he contacted Dr. Ralph E. Pickett, then Associate Dean of New York University’s School of Education, about admission to NYU. Although he was not eligible for admission, Dr. Pickett strongly supported his efforts at self-education, and, over the years, sent him many books and references to further his literary and other interests. As their correspondence attests, the two men shared a friendship and correspondence that would last a lifetime.

On the day after the attack on Pearl Harbor, Tung Pok Chin enlisted in the U. S. Navy. He was the first Chinese person in New York City to enlist, and photos of
his swearing-in ceremony were published in major newspapers in the northeast U.S. to encourage minority enlistment. After his honorable discharge from the Navy, he began to write columns and poems for the China Daily News under the pen name Lai Bing Chan. The paper was sympathetic to the Chinese revolution, and its then editor, T’ang Ming Chao, was an avowed Communist who returned to the mainland soon after the Communist victory. In the 1950s, amidst FBI accusations that he was writing for and subscribing to a pro-Communist newspaper, and fearing that his irregular immigration status might render him vulnerable, Tung Pok Chin burned more than 200 of his own poems and may have destroyed some of his other papers as well.

In 1949, he had returned briefly to China where he met and married Mak Ting Fong; in 1950 he re-entered the United States with his new bride. At first she assisted her husband at his laundry in Brooklyn. The Chins soon became active in the True Light Lutheran Church in Chinatown, and eventually moved to Manhattan. The couple had two children, Wilson and Winifred.

Upon retirement in 1978, Tung Pok Chin began work on his memoir, eventually completed with assistance from his daughter, Winifred C. Chin. The result was Paper Son, One Man’s Story, published by Temple University Press in 2000. After retirement he volunteered to teach English at a senior center in Chinatown, continued his association with the Chinese Hand Laundry Alliance, studied to perfect his English, and enjoyed the literary reputation his published poetry brought him. He died of cardiac arrest in New York City in 1988.

Mak Ting Fong (married name, Wing Fong Chin, b. 1928) first arrived in the United States in 1950 with her husband, Tung Pok Chin. In 1955, when their first child, Wilson, was old enough to attend school, Mrs. Chin started working as a seamstress in Chinatown. Her connection with the International Ladies’ Garment Worker’ Union (ILGWU) began when she interpreted messages for union organizers from English to Chinese at the shops where she worked. Wing Fong Chin understood English, since her father had been an English teacher in Hong Kong, and she used her language ability to aid the effort to organize Chinatown garment workers. She joined Local 23-25 of the ILGWU in 1957 and became increasingly active in the Local’s affairs, serving as vice-president and, from 1983, Executive Board chairperson. She was influential in the 1982 Chinatown garment workers’ strike, involving some 20,000 workers, and testified in September 1985 before the Congressional Textile Caucus and the Senate Subcommittee on International Trade on the catastrophic impact of foreign imports on U.S. jobs. She concluded, “[I]f you ignore us, the message you will send is that there is no room in the United States for people like myself.” Wing Fong Chin became well known in the Chinese-American community as an advocate for Asian American women and for workers’ rights.

Series II: Oversize Posters, Books and Ephemera includes two oversize posters for a rally against foreign imports in the garment industry as well as a Wing Fong Chin’s certificate of graduation from Tak Ching Girls’ School in Hong Kong. Three books presented to Tung Pok Chin by Dean Ralph E. Pickett with annotations by Tung Pok Chin are also included, as are ephemera from the ILGWU, Local 23-25. The Hong Kong Driving License of Wing Fong Chin is also included in this series. Note: The bulk of Tung Pok Chin’s personal library was donated to the Fales Library at NYU by Winifred C. Chin in 1988.