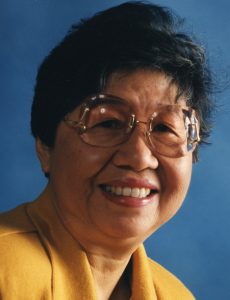 History: Dr. Gloria Wong Chung (1925-2007), a leader in the struggle for healthcare and empowerment in New York City’s Chinatown and one of the first female Asian/Pacific American psychiatrists, was born in Taishan, Guangdong Province. In 1929, Dr. Chung and her family came to the United States, settling in Albert Lea, Minnesota, where they were the only Chinese family.Dr. Chung graduated from the University of Minnesota Medical School in 1948, and for the next fifty eight years worked as a psychiatrist, specializing in pediatric and adolescent psychiatry. In 1962, she was appointed Clinical Director of Health Services in Bedford Stuyvesant under the auspices of the Brooklyn Psychiatric Centers, where she served until 1967, when she took a position with the Children’s Psychiatric Center in Eatontown, New Jersey. In 1972 she joined the staff of the Community Mental Health Center of the Jersey Shore Medical Center in Neptune, New Jersey, where she served as the Director of Outpatient Services from 1974 to 1989. Over the course of her career, Dr. Chung has introduced a number of innovations in psychiatric care, including providing mental health services to municipal jail inmates, pregnant adolescents and women suffering from clinical depression, as well as using anger management training to alleviate domestic violence.