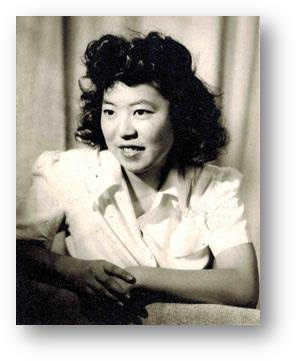 Takako “Taxie” Wada (1921-2016), was born Takako Kusunoki in Colusa, California. While attending public school, Wada adopted the nickname “Taxie” because her non-Japanese teachers had difficulty pronouncing her name. Upon graduating from high school, she obtained a part-time job at one of Colusa’s newspapers, The Sun Herald. It was this experience with the paper that cemented her interest in journalism.

During World War II, the Kusunoki family was incarcerated at the Granada War Relocation Center (also known as Camp Amache), a concentration camp in Granada, Colorado. During this time, Wada wrote a column called “Between Us Girls” for the camp’s newspaper, The Granada Pioneer. When granted permission to leave camp, she relocated to Cincinnati, Ohio and enlisted in the Women’s Army Corps (WAC). Upon discharge, Wada traveled across the country and made her way to New York in the late 1940s. She later worked as the English language editor of The Hokubei Shimpo, where she interviewed notable individuals and covered progressive groups like the Japanese American Committee for Democracy and the Nisei Progressives for Wallace. In 1951, she traveled to Paris to study art under Fernand Léger. She returned to the US in 1952, and married and started a family with artist Steve Wada. She returned to The Hokubei Shimpo (renamed The New York Nichibei) in 1962, and resumed work as its English language editor until her retirement in 1983.

The collection contains correspondence, testimonies, newsletters, event ephemera, newspapers and clippings, and other research materials, much of which focus on the incarceration of Japanese Americans in the US during World War II and the redress movement. The collection also includes materials documenting Wada’s journalism career, her work with Japanese American Social Services, Inc., and other items related to Asian American civil rights activism.