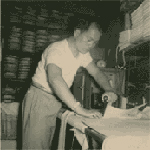 Tung Pok Chin (1915-1988) was born in China and immigrated to the US in 1934 as a “paper son.” He worked in laundries in Boston, Massachusetts before establishing his own laundry business in Harlem and Brooklyn, New York, with the assistance of the Chinese Hand Laundry Alliance. In his spare time, he studied English, read Chinese literature, and wrote prose and poetry. After the attack on Pearl Harbor, Chin became the first Chinese person in New York City to enlist when he joined the US Navy. After an honorable discharge, he began to write columns and poems for the China Daily News under the pen name Lai Bing Chan. In 1949, he returned briefly to China where he married Mak Ting Fong. Returning to the US amidst McCarthyism and FBI accusations that he was writing and subscribing to a pro-Communist newspaper, Chin burned more than 200 of his poems. Upon retirement in 1978, he co-wrote a memoir with his daughter, Winifred C. Chin, Paper Son, One Man’s Story (Temple University Press, 2000).

Mak Ting Fong (also known as Wing Fong Chin, b. 1928-) came to the US in 1950 with her husband. In 1955, she began working as a seamstress in Chinatown. As the daughter of a prominent Hong Kong family, she understood English and used this ability to aid the International Ladies Garment Workers’ Union (ILGWU) in organizing Chinatown garment workers. She was influential in the 1982 Chinatown garment workers’ strike and in 1985 testified before Congress against foreign imports that detracted from American jobs. Her work was important in advocating for the rights of Asian American women and workers.

This collection contains photographs and original speeches of Wing Fong Chin, and articles about her in ILGWU newsletters. The collection also contains navy photos and selected writings of Tung Pok Chin, documents from the “paper son” era, and a collection of letters.