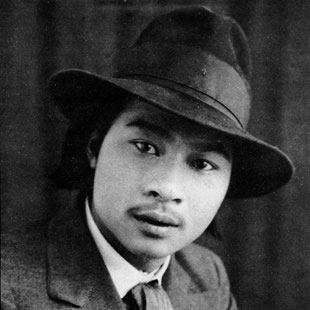 Canton-born modernist painter Yun Gee (1906-1963) immigrated to San Francisco, California in 1921. Deciding to pursue a career as an artist, Gee enrolled at the San Francisco Art Institute and became involved with a group of artists who established the Modern Gallery in 1926. In the same year, he also founded the Chinese Revolutionary Artists’ Club, where he taught classes in advanced painting techniques and theory. In 1927, Gee moved to Paris where he exhibited alongside avant-garde Parisian painters in the Société des Artistes Indépendants’ annual Salon des Indépendants and other famous galleries. In 1930, he married poetess Princess Paule de Reuss, but the couple divorced two years later. He then returned to the US in the early 1930s and settled in New York City. Although he was included in exhibitions at the Brooklyn Museum and the Museum of Modern Art, Gee’s predominant experience in the US art world was one of alienation and discrimination. Gee struggled through the Great Depression and supported himself by participating in numerous programs sponsored by the Works Progress Administration (WPA). Gee continued his involvement in the Chinese community in New York by using his work to fundraise for causes in China, including painting a mural as contribution to the Chinese Flood Relief Campaign. In 1942, he married Helen Wimmer, photography curator and proprietor of Greenwich Village’s influential gallery-café, Limelight, though they later divorced in 1947.

Despite facing anti-Chinese discrimination, Gee broke barriers by often being the first Chinese artist to exhibit in galleries in San Francisco, Paris, and New York. His papers contain personal correspondence from his spouses, and scrapbooks of news clippings from the 1930s to the early 1940s. News clippings mainly pertain to reviews of Gee’s exhibitions but also contain clippings pertaining to his participation in relief efforts for flood victims in China, teaching of WPA classes, and involvement in local Chinatown New Year’s celebrations.

To learn more about the Asian American Arts Centre Records, located at the NYU Fales Library and Special Collections, view the finding aid.